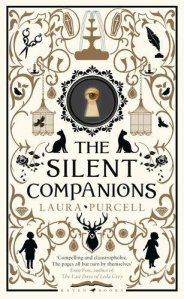 It is 1865 and Elsie Bainbridge carries the cares of the world on her shoulders. Married just months before, her husband Robert has died and she has little choice but to head to his crumbling country estate, The Bridge, where she will give birth to their child. The villagers are hostile and the servants are suspicious and unfriendly. Fortunately, Elsie has her husband’s cousin Sarah for company. They will come to rely on each other very much in the lonely months ahead. But perhaps they are not as alone as they might think.

When Elsie sets about getting to know her new home, she and Sarah come across a locked garret. Inside they find a diary dating from the 1630s and a wooden figure that looks disturbingly familiar. It is, she learns, a Silent Companion. Soon Elsie’s nights are disturbed by strange sounds. The servants insist there’s a nest of rats hiding in the walls. Elsie isn’t so sure – it sounds like wood being worked, being moved.

Interspersed throughout this wonderfully creepy, superbly Gothic novel are extracts from the diary which take us back in time to 1635 when Anne Bainbridge was mistress of the house. At that time everyone was hugely excited because King Charles I and his Queen were intending to spend a night at The Bridge. Everything was going so well…

I love haunted house stories and The Silent Companions was a book I couldn’t wait to read. I’d been told that it was genuinely frightening and so I settled down to read it late one evening. In fact, I only read this book at night. This isn’t a book for commutes and lunchtime reads – it deserves to be read by lamplight, when every sound seems louder in the quiet night. It’s a hugely atmospheric read. The Bridge is a fine example of a rickety, old and unloved Gothic mansion. It creeks. Its wood feels alive. And in its midst are Elsie and Sarah. We fear for them.

The sections from the 1630s are every bit as engrossing as the Victorian chapters. And the characters are just as intriguing, if not more so. Told in Anne’s own words, during these sections we are immersed in the past and it’s a dangerous and fearful place indeed.

I had two very late nights with The Silent Companions. I didn’t want to put it down and I couldn’t wait to pick it up again. It certainly gave me the heebie jeebies and made my spine shiver. I love that feeling! It’s dark, tragic and, at times, deliciously scary, but it never goes overboard. The emphasis here is on Elsie and Anne and what this house, so claustrophobic and dark, does to them, two centuries apart. It’s quite a tale, full of Gothic wonders. I must also say that the hardback is gorgeous inside and out.

5 thoughts on “The Silent Companions by Laura Purcell”