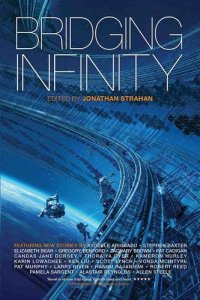 Bridging Infinity, edited and introduced by Jonathan Strahan, is the fifth collection in the Infinity Project series and it presents fifteen new short stories, all hard science fiction, by some of the finest authors of SF writing today. Any anthology that features new stories by Alastair Reynolds, Stephen Baxter and Ken Liu is not to be ignored and it meant that I jumped at it, so much so that I bought the beautiful large paperback to complement my review ebook. I now have the series but, I’m ashamed to say, this is the first I’ve read. I’ve only recently been converted to SF short stories (I am a brickbook fan, after all) and I have Alastair Reynolds to thank for this. I have catching up to do – it will be a pleasure.

The inspiration behind this collection is ‘sense of wonder’ and I make no bones about it – it is this very thing that attracts me to hard science fiction more than anything else. I love an author to open my eyes to the wonders of the universe, whether they have been inexplicably created, engineered by mankind or built by mysterious alien species. These things can make humans seem so small and insignificant but they also have the power to make humans feel infinitely important, enormous, powerful. This anthology looks at humanity’s place in a solar system, galaxy or universe of incredible engineering. These builders demand that we are awstruck by their achievement, ambition and endeavour.

The stories are a product of their times and, as such, a fair few are filled with concern at mankind’s treatment of what is currently the only planet available to us, Earth. There is a melancholic strand that weaves its way through some of the stories as people find ways to save the planet, rebuild it or abandon it forever. It’s a pleasing curiosity that in a collection of science fiction tales inviting us to marvel at the universe, its greatest treasure is to be found beneath our feet.

I’m not going to describe each of the stories because that would spoil the book but I do want to mention some of my personal highlights. Despite the variety in story and styles of narration, there isn’t a story that I didn’t like, although there were a few that I understood less than the others (particularly ‘Mice Among Elephants’ by Gregory Benford and Larry Niven). I don’t expect to understand everything in hard science fiction. If I did my eyes wouldn’t goggle and my jaw wouldn’t drop at such regular intervals when I come across something that astounds me. But I did have a few favourite stories, including ‘The Venus Generations’ by Stephen Baxter and ‘Seven Birthdays’ by Ken Liu. Both of these stories make use of lives extended beyond their normal human parameters and consider the impact of this on relationships. The mix of the epic (the drive to engineer something that will save planets or life) and the intimate (the need to maintain relationships with children and parents) really appeals to me. They prove to be both awe-inspiring and poignant.

Time travels in great swathes through a few of the stories and this gets unusual treatment in ‘The Mighty Slinger’ by Tobias S. Buckell and Karen Lord. In this story, arguments rage over the fate of Earth and caught in the middle is a band that is woken up at various intervals to play for different sides of the debate. There is humour, too, and ‘Ranger in Space’ by Charlie Jane Anders is a fantastic story. AIs are taking control of the universe and the only thing standing between humanity and eradication is a bunch of party-goers. What a strange world this presents. I rather liked it. Humans are not the only beings in this collection, and neither are AIs. There are other stranger things.

Different environments feature, including a flooded New York City, a Dyson Sphere-like construction of almost unimaginable size, crisscrossed by trams. There is a giant ship in which one man believes himself alone except for an army of working robots – how frightening that could be if you hear a noise that shouldn’t have been made, or catch a glimpse of something out of the corner of your eye that shouldn’t have been there to be seen. The most disturbing story for me was ‘The City’s Edge’ by Kristine Kathryn Rusch and to find out why you need to read it.

There are riches waiting to be discovered in Bridging Infinity. And now I’m keener than ever to investigate the other volumes in the Infinity Project – who knows where they’ll take me. 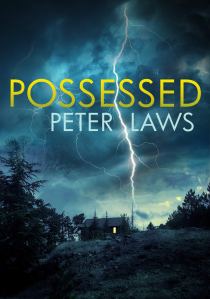