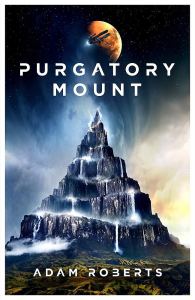 In the far future, a spaceship carrying a crew of five human entities, the type that can live for thousands of years and regard themselves with godlike eyes, arrives at a distant planet and discovers an enormous artificial mountain, a tower that soars into the sky. For everyone on the vessel, whether human or divine or something else, is this the end of their journey?

In the near future, America is falling apart. Chemical warfare has robbed many of its people of their memories. Memories, essentially identities, are stored on phones. Without their phones, these people will sit and let themselves die, not even remembering that they need to drink a glass of water. The country has become the United States of Amnesia and it is about to get even worse. 16-year-old Otty and her friends have created their own private internet network, a support network, using a technology that isn’t controlled by the eSpires that tower over the land. Agencies want this technology and Otty and her friends must endure a dystopian hell.

Adam Roberts is a master of intriguing science fiction with big ideas and themes. His books also have the most beautiful covers! Purgatory Mount is no different. The novel is in three parts, with the central and longer story of Otty and her friends sandwiched between the far-future story set in space. I loved the opening on an alien world and then we moved to the near-future USA and I was completely captivated by the young Otty. She is a marvellous creation, a living, breathing teenager who is essentially vanished by the authorities. All she has to do is remove their phones, disconnect these bullies from their memories, but it’s almost as if she doesn’t want to do that. There is a decency about Otty that I loved. I really felt for her in her moments of fear and isolation but she is so clever and resilient. The world around her is in such a terrible state but with Otty around it’s difficult to give up hope entirely.

The dystopian American world is vividly imagined and portrayed. It’s recognisable. It’s only a step or two away from where we are, which makes it all the more believable and frightening. The end of the world seems so close and yet, when we are with Otty, it feels like this can be avoided.

One of the things I absolutely love about science fiction is that I can thoroughly enjoy a story, be amazed by its vision and wonder, without necessarily having to understand all of its ideas. I don’t need to understand it entirely to be in awe of it. This is the case with Purgatory Mount. Its two threads do join together and I like very much the ways in which they do. The past influences the future. It moves it forward, or in other directions. In the afterword, we are reminded of paradise lost and paradise found, the circles of purgatory and hell. I have read Dante but that certainly isn’t necessary to find oneself immersed in this tale of sin and atonement, humanity and the divine, identity and confusion.

Adam Roberts has always been so good at creating female characters and Otty is one of my favourite fictional characters in a fair old while. I adored her while fearing the world she lives in. I did prefer her part of the novel despite imagining, at the beginning, that I would love most the far future story in space. This is possibly because Otty is far easier to relate to than the entities of the future, however intriguing they are. The best science fiction entertains and dazzles me while also making me think. I’m reminded of the author’s The Thing Itself (I loved that book!) and I’m going to be thinking of Purgatory Mount for quite some time. And that cover!

Other reviews
The Thing Itself
The Real-Town Murders