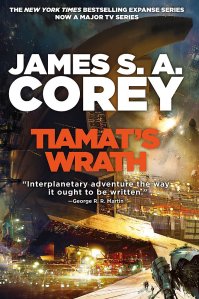 Tiamat’s Wrath is the eighth novel in the Expanse series and surely there can be no science fiction series being written today that I love half as much as I do this one. I love it so much I don’t watch the TV series. I may do one day, when the books are done, but for now I have my own idea of what Holden, Naomi, Alex, Amos and Bobbie look like and behave and I’m leaving that picture untouched. Because I love them all. James S.A. Corey, two authors writing as one, has created a universe among the stars that is thrilling, intense and vast, but is also emotional and warm, driven by sacrifice and courage, and that’s largely due to the crew of the Rocinante. Clearly, Tiamat’s Wrath shouldn’t be read out of sequence and so this review assumes that you’ve been on board from the beginning. Consider yourself warned!

I’m going to keep the details about what happens here to the bare minimum because one of the many things that I’ve always loved about this series is that each book is different from those that went before. The last novel, Persepolis Rising, was set thirty years after the events of the book before (Babylon’s Ashes), adding a whole new dynamic to the series and now we have another jump in time.

Laconia is now the dominating force in the Galaxy, ruled by High Consul Duarte. The Laconians control the alien gates which give access to hundreds of solar systems. Alien technology has given the Laconians the most fearful spaceships humanity has ever developed. Will Holden is a captive on Laconia while his crew is dispersed. They fight for the underground now. Each is prepared to make the ultimate sacrifice to free the colonies, including Sol, the original inhabited solar system and home of Earth. But something alien is now tired of being a mere observer. It is about to fight back and humanity will have much more than the Laconians and their fearful manipulation of the protomolecule to dread.

Tiamat’s Wrath is such a thrilling novel and it wastes no time in throwing the reader into the midst of it. We’re used to having to find our feet again at the start of these novels – everything has shifts as it usually does – but it’s not long before we’re up to speed. And it’s terrifying and exhilarating in equal measure. There are lots of questions to be answered, mostly about what has happened to the Roci crew, but the pieces come together as chapters move between the perspective of each crew member in turn, with one exception, and soon we’re in no doubt about the task at hand as humankind once more faces war, against each other and against something far more dreadful.

There are one or two new voices here, too, as there always is in these books, and they are wonderful, giving us more background on Laconia, a place that you sense could so easily have become a paradise. It’s now thoroughly infected.

There are moments of such intense feeling. You only have to read the very first sentence of the novel to see the direction in which events are heading. I’m not going to repeat it but it’s quite likely it’ll give you the same jolt it gave me. And that’s not the only shock you’ll get.

All of this is set against such a brilliant backdrop of planets, spaceships, moons, gates and space stations. It’s rich and vibrant and fascinating. But that’s as nothing compared to the people here. We love them. We are deeply invested in their story – not to mention their survival. Tiamat’s Wrath is one of the very best of the series. It’s engrossing, disturbing and troubling, full of heart and sacrifice, packed with action, and with an alien threat that is as thoroughly terrifying as it is mysterious. Bravo! I wish this series would never end but I suspect that the end is approaching.