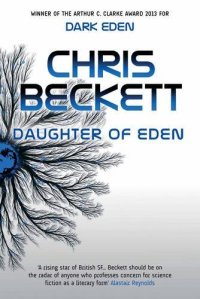 Back in 2013, Chris Beckett won the Arthur C. Clarke Award with Dark Eden, a novel that was also one of my top reads of that year. Dark Eden was followed in 2015 by Mother of Eden and now comes Daughter of Eden, the conclusion of a science fiction trilogy like no other. If you had to, you could read Daughter of Eden without having read the others, but I really wouldn’t recommend it. This review assumes you’ve read the previous novels.

Eden is a dark world indeed. Its inhabitants live in perpetual twilight or night, lit by the lanterns embedded in the bodies of the curious animals and plants that fill the dark air with their unique sounds. Tribes of humans scrape together a living, increasingly suspicious of the other communities scattered across land and sea, especially the distant tribes that have discovered something precious and dangerous – metal. Everyone, though, is united in their devotion to Gela, the Mother of them all, the origins of their religion and myth. For long ago, after a difficult journey from Earth, Angela and two men, astronauts, were marooned for the rest of their lives on Eden, their only comfort the creation of a family that has now populated the planet, albeit it with the deformities – batfaces, claw feet – of centuries of inbreeding.

About two hundred years have passed since the divisive events of Dark Eden, events that transformed Eden’s society for ever and the planet is still reeling from the repercussions, as revealed in Mother of Eden and the story of Starlight, a remarkable young woman who strove to liberate other women from their oppressors. Daughter of Eden takes place just a few years later and focuses on Starlight’s friend, Angie, a batface and like most women of Eden, the wife of a man she doesn’t love and the mother of children who face a similar future. But we can never forget the beauty of their dark planet because, as much as the legend of Gela, Eden has shaped their lives and beliefs. Most of them, though, want to go home.

All three of these novels are beautifully written, the descriptions of Eden so entrancing, and the language of the people so evocative – theirs is a simplified, charmed English (small flying creatures are ‘flutterbyes’), one that has evolved through the centuries yet retains the collective memory of a past on another planet that they never knew (‘lecky-trickity’ and ‘veekle’, for example). Daughter of Eden returns us to this gloriously dark world while also showing us just as deeply as before that society here is deeply flawed, its beliefs distorted through the years.

The character of Angie pulls Daughter of Eden together. The narrative moves to and fro across the years, showing Angie’s earlier life as an assistant to Mary, a shadowspeaker, as they travel across Eden spreading the message of Gela, and then later on as Angie and her family return to the circle where Gela’s spaceship first landed. And all the time, the conflict between tribes begun in Dark Eden and continued in Mother of Eden, worsens.

Dark Eden is perhaps the most perfect of these three novels. Time is spent on the most stunning descriptions of Eden and its animal life, and the dialogue feels particularly fresh and original. Daughter of Eden, though, doesn’t come far behind and, in my opinion, is a more satisfying novel than Mother of Eden. This is the concluding novel – my expectations were high – and I loved how the story developed and finished – during the second half in particular I was engrossed.

I’ll miss the world of Eden and its mostly lovely inhabitants but enough doors are left open here that I hope that Chris Beckett may return to this place in the future, or perhaps continue the story of Trueheart who is one of the most memorable figures of the novel. I’ll never forget Eden, its beauty, language and the wonder of it all, as well as the extraordinary premise of how its human inhabitants came to be there in the first place.

4 thoughts on “Daughter of Eden by Chris Beckett” 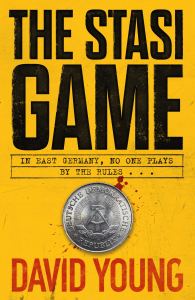