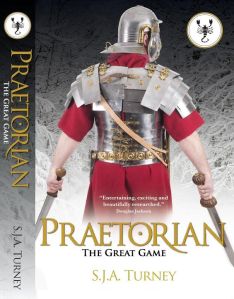 This week, Praetorian: The Great Game was published. A new novel by S.J.A. Turney is always a cause for celebration for all those who enjoy Roman military or Byzantine historical fiction and I am delighted to be able to mark the publication with an author’s guest post. Simon’s novels are meticulously researched, written by an author who loves to travel and see in the wild the locations that he is then able to describe so vividly. I am particularly interested in how historical fiction is rooted in the remains and archaeology that is found around us and below us (I am a keen archaeology tourist myself) and so I am really pleased that this is the subject for the post below. I now have lots more travel ideas! The photos were taken by the author.

Have you ever read a novel and just not been able to picture the setting? Perhaps a knight is preparing for his tourney, and the author is setting the scene, but the castle is just so miscellaneous that it makes absolutely no impression on you? I know I have. And then sometimes you’ll read a novel where the setting of a scene is just so vivid that it comes alive in your mind. Then think, which of those novels is likely to have an effect on you; which is going to stay in your thoughts and imagination long after it’s finished. 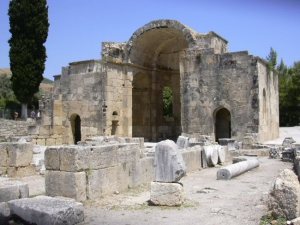 Agios Titos at Gortyn from The Pasha’s Tale

That, I think, is the value of realistic locations in writing. The plot and the characters can be as well-crafted as possible, but if the scenery is bland and unimpressive, the reader might not even notice. To me, location is of vast importance in scene setting and, because my work is thoroughly rooted in history, I’m very lucky that most of the locations I use are real, and many still exist. And so, in an effort to make the scenes in my books as evocative as possible, I like to visit and research every possible site. 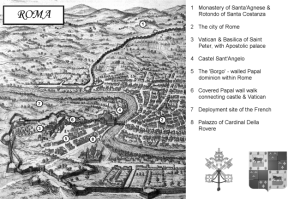 Rome map from The Assassin’s Tale

Such is the case with specific locations I use. In the writing of The Assassin’s Tale, I needed a location that was a monastery or church of some sort that was outside the walls of Rome as a base for my characters. While researching and planning the book, I ran through a list of the churches of Rome (and that’s a looooong list!) I disregarded any within the walls and any more than 2 miles from them. Then I disregarded any that were too new to have been in use in 1493/1494. That created a short-list. Pictures and stories and history of the buildings helped me pare that list down to three possibilities. I added those to the potential locations for the book and then, when I went on my research trip to Rome, I visited all three. 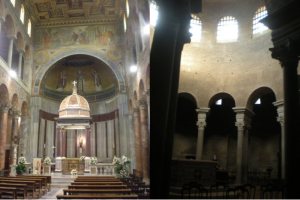 Mausoleum of Santa Constanza from The Assassin’s Tale

San Lorenzo fuori le Mura was interesting and fitted the bill, but it just did not buzz. San Paolo fuori le Mura was ancient and fascinating, but just not quite right. And then we visited Sant’Agnese with the mausoleum of Constanta, and the atmosphere of the place blew me away. It was the spot. So I spent time just wandering around, soaking it all in, paying attention to the details, imagining my Cesare Borgia and Cesare Orsini having their clandestine meeting there. I took photos of every angle that might have a bearing on my story. The result? Well, I hope, a real-feeling scene. 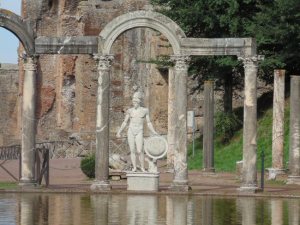 The Canopus of Hadrian’s Villa from Praetorian

Sometimes I already know the location (such being the case with the Villa Hadriana in Praetorian: The Great Game.) I had visited the ancient imperial villa at Tivoli near Rome and thoroughly explored it before, and so knew I wanted to use it, and even how I wanted to use it. But in order to understand how the complex would need to come across (in terms of guarding certain areas of getting to places without being seen) I needed to revisit and check it all out. Sadly, there are parts of the villa I used that are not open to the public, and so I was forced to extrapolate from what can be seen and fill in the blanks with imagination, but these things cannot be helped. 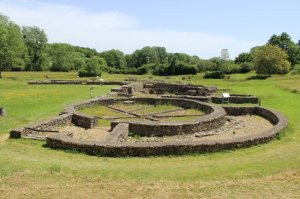 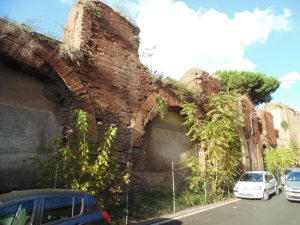 Then there are locations I stumble across that are simply too good not to be used in a tale. In Marius’ Mules VII, a whole scene was created because when visiting locations for the book, I stumbled across Les Fontaines Sallees and the place impressed me. It was in the rough area in which the book’s action took place, and was just too fabulous not to use, and so the scene of Fronto’s quiet chat with Cavarinos was born.

Sometimes, of course, a location doesn’t need visiting in order to experience the ambience or soul of the place, but for purely logistical and geographical reasons. Such was the case with Praetorian, in which an aqueduct settling tank hosts an important scene and, although the specific location no longer exists, I walked the length of the aqueduct’s remains (the Aqua Claudia on the Caelian Hill in Rome) in order to attempt to understand how it worked and looked in its heyday. 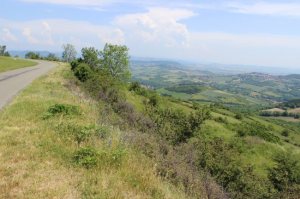 Having first-hand knowledge of the location is also of prime importance when writing a battle, in my opinion. It is easy enough to visualise an actual fight between two people or two groups of people. But in cases when the terrain affects the action, it becomes important to describe the terrain. This is especially important for sieges. And since a lot of my work involves Roman battles, this is a large part of my research. Walking a battlefield gives the author a real idea of how the action occurred. The sieges of Gergovia and Alesia in Marius’ Mules VII both involved a lot of walking the site (and even driving them, given the sheer scale.) I had read Caesar’s own account of the battles, and a number of historians’ accounts. But they are all simply descriptions of places and movements until you stand in the location of the Gallic camp and look down the hill, imagining the three legions moving up against you. Only that truly brings life to the descriptions. And in the absence of being able to take the reader there and guide them around, having done so myself at least gives me the opportunity to attempt to pass that on as much as possible to them. It is a geographical equivalent of the relative values of reading a book about a famous person, and talking to someone who’s met them. The difference is almost tangible. 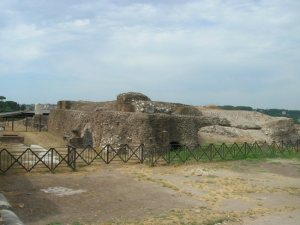 The Temple of Apollo from Praetorian

Of course, with historical locations, things are very rarely seen in the form in which they stood at the time, and the farther back your setting, the less likely that is. For those of us writing in the classical era there is by necessity as much use of imagination as legwork in investigating our locations.

Sometimes the location is so ruinous that you have to use your imagination as well as any reference texts or reconstructions available to try and mentally rebuild the place so that you can picture it. If your imagination is good enough, you can take the landscape and the bones of the place and reconstruct the whole thing vividly enough to walk around it and experience it directly. In planning The Pasha’s Tale, I needed to use the Yedikule fortress in Istanbul. In its bare form, the fortress still exists, and with little new build covering it. But in the era in which I was writing, it was a veritable city, full of barracks, administrative buildings and even a mosque. Compare the historic map of the fortress with the current state and try and combine them and you’ll see what I mean. Then imagine being there and walking around it, picturing it. That’s the way to make the location come alive. Once you’re experienced that, you might be able to convey it to a reader. 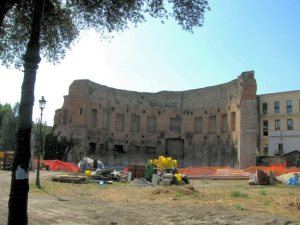 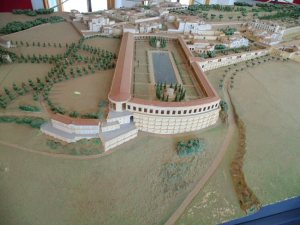 Model in the museum of Hadrian’s Villa

In other cases, sadly, the old site remains but the modern world has so grown up around it that rather than rebuilding the ancient, you are forced to strip away the modern and try to picture what remains. In Praetorian, I used the baths of Trajan on the Oppian Hill in Rome. Now, the street that I used as my location is still a street, but the fragmentary ruins of the baths lie on one side, and the modern world on the other. Standing there, one needs to strip away the modern side and replace it mentally with Roman insulae at the same time as reconstructing the baths.

It has probably become obvious by now that as well as visiting the sites to be used, historic maps and images of them, as well as archaeological reconstructions, are invaluable. Often, a site simply cannot be mentally reconstructed without reference to the work of some very clever men and women who investigated the site archaeologically and first postulated the theories as to what they used to look like and how they used to work. It is only so much use standing on a battlefield without having some reference as to what actually happened there. It is only so much use exploring the tunnels of the colosseum without knowing how they were used and organised. Preparing a location for a book is therefore a matter of superimposing data upon the landscape. 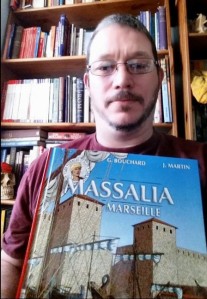 Simon and his research…

So you can perhaps see how much work goes into trying to flesh out a location in a historical novel. And with that, I shall say thank you very much to you for taking the time to read this, and thank you tremendously to Kate for allowing me to write a post for her excellent book blog, which I have long regarded as one of the very best. And now back to investigating Roman Marseilles for Marius’ Mules VIII.

Thanks so much to Simon for the kind words and for spending so much time putting such such a fascinating post together! 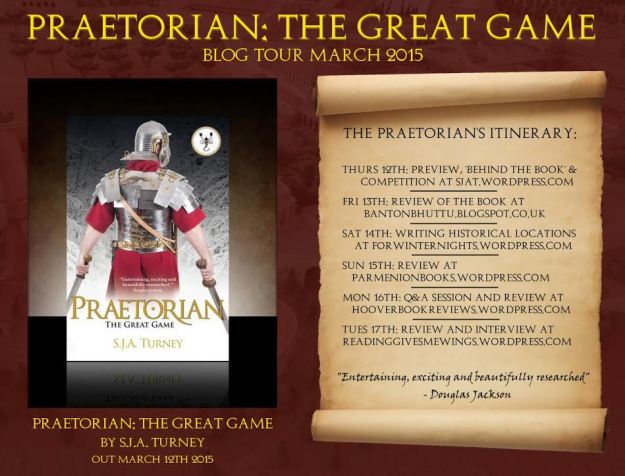