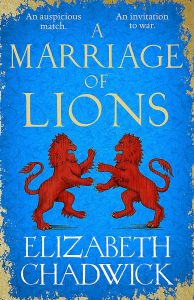 It is 1238 and Joanna of Swanscombe serves as a lady in waiting to Eleanor of Provence, Henry III’s Queen.  Joanna’s future is uncertain despite her illustrious heritage – she is granddaughter to William Marshal – but many stand between Joanna and any chance of inheriting her family’s land and titles. But all of that changes and suddenly Joanna discovers herself to be one of England’s wealthiest heiresses. She has become a prize and the King decides to award her to his own half-brother, William de Valence. Now a grand lady in her own right, Joanna’s relationship with the Queen changes as the nobles of England, led by Simon de Montfort, turn against Henry’s half-brothers. Civil war grips the land and Joanna and William must use all of their skill to avoid the destruction of everything they hold dear.

Elizabeth Chadwick has long been a favourite novelist of mine and the novels of hers that I love the most are those that focus on William Marshal and his extraordinary family, as well as on the women who are less well known to history but nevertheless played a significant role in public life in the 12th and 13th centuries. A Marriage of Lions gives us just such a story, and it is every bit as wonderful as the author’s last novel The Irish Princess, which I adored. Joanna is a fabulous character and, as we follow her from childhood to middle age, we experience so much of life at the court of Henry III, domestic and political, a place divided by land- and power-hungry lords, these conflicts intensified by strategic marriages. There can be no peace for Joanna once she’s wealthy – others want that that wealth – and once she’s married above her station.

It’s a fantastic story and it immerses the reader in so many ways. The domestic details of a privileged life in the early 13th century are particularly interesting, with Joanna moving between palaces, castles and manors, turning fortified walls into a home, even travelling between England and the Continent. It is grand until we’re brought into the birthing chambers of Joanna and the women she knows. It is then that these women are faced with a life and death situation. The brutal reality is that women faced death throughout their child bearing years and Joanna, the Queen and other women in the novel give birth many times. Death is a companion and a shadow. Rank is irrelevant to it. There are moments in this novel of such sadness.

Then there’s the political and martial side to Henry III’s court. The son of King John, Henry is a weak ruler and often a weak man. The novel takes place over a fair few years and we watch Henry and his wife change in character. Joanna feels it keenly. It’s actually tragic to watch Henry’s decline and the Queen’s increasing hostility. The title of the book, A Marriage of Lions, is so well-chosen and apt. There are many lions and lionesses in this novel, not least of whom is Simon de Montfort, who is well drawn here as an appalling bully. Henry is trapped between big personalities, including that of his brother William de Valence, Joanna’s husband. I loved William. He is a man of action and a man who frequently makes errors of judgement but he is always likeable. His marriage with Joanna is arranged but it is strong. It’s such a pleasure to read about Joanna and William’s life together and the way in which they face their trials.

Elizabeth Chadwick illuminates this period of medieval history like no other author I can recall. The men, women and children of her novels are so believable and genuine. Their motivations and aspirations are so well understood. I’ll be visiting Goodrich Castle in Wales shortly and, when I do, I’ll think of Joanna walking in its grounds. She lived there so many hundreds of years ago but, thanks to Elizabeth Chadwick, I can feel a connection. Likewise, when I’m next in the grounds of Blenheim Palace, just down the road from me, I’ll stand where the royal palace of Woodstock once stood and imagine Henry III and his court feasting, laughing and fighting in its great hall.

A Marriage of Lions tells an utterly engrossing and captivating story, giving Joanna and William the limelight they deserve, bringing them out of the shadow of the monstrous and astonishing Simon de Montfort. I was particularly fascinated by the depiction of Henry III’s marriage but Joanna and William take centre stage and shine in this fabulous, immersive novel.