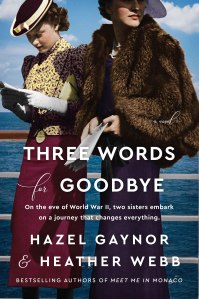 Clara and Madeleine Sommers were once the closest of sisters but their differences have driven them apart. But now they must come together to fulfil the final wishes of their much loved and dying grandmother, Violet, who has asked them to travel to Europe from their home in America to deliver letters to three people who changed Violet’s life in her own travels across Europe 40 years before, a journey inspired by the great explorer, journalist and close friend Nellie Bly. But the year is now 1937 and Europe is a very different place. As Clara and Madeleine embark on the Queen Mary for Paris, Venice and Vienna, they will find a Europe slipping into the darkness of fascism. There is much for the two sisters to experience before they can return back to New York City aboard the Hindenburg.

I am such a huge fan of historical romance set during the earlier decades of the 20th century and, after reading the authors’ fantastic Meet Me in Monaco, I couldn’t wait to read Three Words for Goodbye. I am fascinated by the 1930s and this novel does such a good job of exploring the culture of the time in the three great cities of Paris, Venice and Vienna, while subtly portraying the sinister menace and threat of Nazism, which increases as the sisters move from France to Mussolini’s Italy and Nazi Austria. The sisters travel in luxury and style, heightening the contrast between their experiences and those of the local people, whose freedoms are being threatened. They are shocked by the violence they witness and the rumours they hear. But the focus, though, is on relationships, both old and new.

The novel is effectively divided into three as the sisters progress across Europe and deliver each of the three letters, discovering more and more about their grandmother’s life when she was a young woman, while also learning about each other and what they both want from life. Clara, in particular, has some significant decisions to make. The chapters alternate between the two women and it works so well.

I loved Three Words for Goodbye. It’s romantic but not sentimental and tells a wonderful story about families, growing up, finding and losing love, being an independent woman at a time when this was not easy, especially if from the kind of background that Clara and Madeleine are from. It also has a fascinating historical setting and the descriptions of 1930s’ Paris, Venice and Vienna, as well as the voyage aboard the Queen Mary, are fabulous. As for the section aboard the Hindenburg…. Hazel Gaynor (one of my very favourite authors) and Heather Webb are a collaborative tour de force and I can’t wait, and hope, for more.