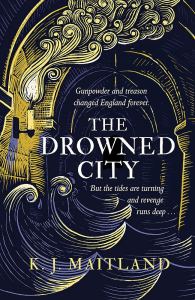 It is 1606 and Bristol has been devastated by a catastrophic tidal wave. Many are dead, lost, orphaned or homeless. It’s a year after the Gunpowder Plot and James I and his adviser Robert Cecil are overcome with paranoia and fear. While Cecil worries about plotters, James is concerned about witches. Daniel Pursglove, who has special talents, is despatched to Bristol with two missions – to find the escaped Catholic conspirator Spero Pettingar, who is believed to be in Bristol, and to find out whether the terrible flood was an act of God or the work of witches.

Daniel finds a city wrecked by the flood, its citizens tested to their limit, susceptible to rumours of witchcraft, desperate to find somebody to blame. It’s not long before there are lynchings, Jesuit plots, and then Daniel discovers there is a murderer at work.

Karen Maitland writes beautifully about the people of the past and their lives and beliefs, especially in the medieval countryside. Now, writing under a slightly different name, she turns her attention to the early 17th century and a time that was more modern and knowable in some ways but was still alive with suspicion, fuelled to a large degree by the witch-hating James I. The starting point is compelling – the true story of the wave that destroyed much of Bristol – and here she puts it in a context of religious turmoil, persecution, conspiracy and suspicion.

The result is a richly evocative and atmospheric novel, gorgeously written, with attention given to the details of daily life as well as the devastation of the flood. This is a population that has been traumatised and we feel that keenly. We meet men, women and children in dire straits, including a young boy who must survive as best as he can, homeless and still hoping that he can find his family, that they won’t be lost to the sea. He is one of the survivors and they can be ruthless.

Daniel is an outsider who wanders through the city’s streets, suspected by many and a witness to some terrible things. There are some devastating scenes in The Drowned City as people find witches in ordinary places and treat them brutally. Daniel is there to uncover secrets, without knowing what those secrets are. He is caught in the middle of something that he can hardly understand but it constantly reminds him of a past he is trying to forget.

The Drowned City is beautifully written, with an emphasis on atmosphere, on Bristol and its people during this period of turmoil and persecution rather than on the plot, which meanders considerably. I did find this a little frustrating on occasion but it is certainly engrossing and involving. I loved the scenes featuring King James – especially the memorable scene when he visits the Tower of London to see his lion. This is fabulous! I’ve read a fair few novels featuring James over the years and this James is excellent (and fortunately long dead)!