WELL! What a difference a month makes and, as I write this in Lockdown, it’s hard to imagine a more profound change. I hope you and your families are all well, safe and managing as we adjust to the New Reality. This has impacted on my reading and I suspect that I’m not alone in this. It’s also affected my work on The Project. It’s just been too hard to focus, especially as my energy and computer time has been absorbed by adapting to working from home, with all of the challenges that entails. But I know I’m very fortunate in that I can do that. Many can’t. And to those who continue to work on the Front Line for the benefit of us all, I raise a glass (imagine suitable emoji at this point).

But the good news is that I’ve started to pick up my Project again and I’m continuing the massive task of typing it up, while carrying out a second edit. I’ve just realised that I may have to make some changes because some of it is set in 2021 and that 2021 is now not the same as it was when I began. Fortunately most of it is set in the past. And the other good news is that my reading has picked up again and I’m now finding a great deal of comfort and company in it, particularly in historical fiction and science fiction. I’m not sure when I’ll be able to read Gritty Fiction again. It could be quite a while. But I’m hoping that I’ll be able to get back to enjoying crime fiction again soon. I decided to reduce my GoodReads Reading Challenge target by 25 to 125 books. Better to be realistic than continually fall short of my target.

So what have I read this month? The answer is not a lot and a few of them weren’t very successful reads. The Mirror and the Light was one of the books I was looking forward to the most this year and its 900 pages took up much of the first week of March. Sadly, although the writing is stunning and there were some fabulous sections, I found it far too long, with too much of its narrative reporting on events rather than witnessing them. I realised once I was done, that there was one thing very much missing from this final volume which brought the previous two to glorious life – Anne Boleyn. What might have been a factor was that I was quite ill with ‘flu’ at the start of March and this made it very difficult for me to read. I then read a few thrillers for light relief but, unfortunately, The Bug had struck by then and I couldn’t focus on them: Tom Clancy’s Op-Center: God of War, The Warsaw Protocol and The Holdout. 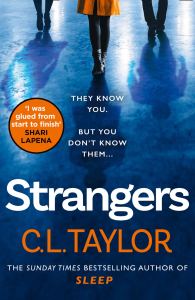 A psychological thriller that I really did enjoy was Strangers by C.L. Taylor. I was after a tense puzzler, a twisty pageturner, and this did the trick. I read it in a couple of sittings and I think it’s one of the reasons why I got back into reading again. It relit my fuse, if you see what I mean…

There were more goodies as I headed off into the past or off planet. I loved Light of Impossible Stars by Gareth L Powell! Embers of War has turned out to be one of my favourite space opera trilogies and it ended in fine fashion. I love Trouble Dog, what a great spaceship – part human, part machine and part dog.

I am such a huge fan of Harry Sidebottom whose Roman thrillers and military action epics have entertained me for so many years now. This summer he’s releasing something a little different. The Return is a Roman whodunnit set in the 2nd century BC. Its central figure is a soldier and so there’s plenty of military action but there’s also an unsettling and gruesome murder mystery for him to solve. I really enjoyed this, completely losing myself in a different world. My review will follow closer to publication in June. It’s definitely one to look out for.

My favourite read of the month was Liberation by Imogen Kealey. This is the beautifully written story of Nancy Wake, a real-life heroine of the French Resistance, whose extraordinary and deadly career in France in 1943 and 1944 is vividly portrayed. It’s a stunner. It’s upsetting at times but it carries a message that bad times will pass. And I hung on to that.

My current read is shaping up to be every bit as good, and it’s by one of my favourite authors – The Last Protector by Andrew Taylor. Once more we return to London in the late 1660s, when the shine and glitter have been stripped from the Restoration Court and sedition begins to rear its head. It is excellent.

Other books I reviewed in March and not already mentioned were We Begin at the End by Chris Whitaker – without doubt this spectacular novel is a candidate for my book of the year. Rules for Perfect Murders by Peter Swanson – I loved this witty homage to classic crime fiction, which tells its own clever murder mystery. Meet Me in Monaco by Hazel Gaynor and Heather Webb – this is a sumptuous and enchanting novel which goes back to Cannes in the 1950s when a Hollywood actress, Grace Kelly, meets her prince. The Deep by Alma Katsu – a hugely entertaining horror thriller, which takes us back to the Titanic where there was even more than an iceberg to dread. In Five Years by Rebecca Serle – a devastatingly sad and beautiful tale of love, but not necessarily the love you’d imagine. When You See Me by Lisa Gardner – Flora and DD return – excellent – as Flora must confront her past once more.

Looking ahead
April is an absolute bumper month for new books! April isn’t going to be any easier than March, far from it, but, hopefully, we will get used to it more, while, and this is the important bit, staying well. I intend to do much more reading in April and will be looking forward to picking up some corkers. I’ve been kindly sent over 30 books to review which are published during the month and, although I won’t be able to read them all, there are plenty I can’t wait to read.

Two of them I’ve already read and reviewed. Strangers by C.L. Taylor and We Begin at the End by Chris Whitaker. Another that I’ve read with a review on the way is The Cutting Place by Jane Casey. This book is magnificent and I can’t wait to tell you more about it later this week!

But among the others on my immediate reading pile are (in no particular order):
Magpie Lane by Lucy Atkins (set in my home town of Oxford!), I am Dust by Louise Beech, The Book of Koli by M.R.Carey, The Dead Line by Holly Watt, The Last Emperox by John Scalzi, Power Play by Tony Kent, Eden by Tim Lebbon, The Wasteland by Anna Jaquier, The Silent Treatment by Abbie Greaves, The Grove of the Caesars by Lindsey Davis, The Supernova Era by Cixin Liu, and no doubt plenty more!

I still have books from February and especially March that I want to return to, especially The Land Beyond the Sea by Sharon Penman, Without a Trace by Mari Hannah and Burnt Island by Kate Rhodes.

So, while there are challenges to come, there are also treats – and I haven’t even mentioned Easter Eggs yet! It just leaves me to say that I hope you and your loved ones stay well and that books can give you some respite. I’d love to hear which books have been a comfort to you at this time. I’ve been given a voucher. I want to spend it! All the very best to you x