I recently read The Mitford Scandal by Jessica Fellowes and I absolutely adored it, so much so I immediately went out and bought the two books that preceded it and read them straight away. I’ve always been interested in the Mitford sisters, not least because they lived not too far from me and I regularly visit the beautiful Swinbrook church (the daffodils are gorgeous!) where they’re buried as well as their home and its adjoining church at Asthall. I’m also fascinated by the 1920s and 1930s (Brideshead Revisited is quite possibly my favourite novel), as well as being a Downton Abbey addict. Thinking about it, these novels could have been written for me.

I have, of course, read them in a bit of a daft order, starting with the third and latest, The Mitford Scandal, which focuses on Diana Mitford, and then going back to the beginning, leaping back ten years or more to 1920 and The Mitford Murders (focusing on Nancy) and then on to Bright Young Dead (focusing on Pamela), set during 1925 and the heyday of the flappers who fill these pages. Reading the two earlier books made me appreciate the third even more. It also made me feel more forgiving towards Gus and more understanding of our heroine, Louisa, nursery nurse to the Mitford girls, later their chaperone, and always wanting to escape service while being extremely grateful for the safety and security that this work offers. Characters also appear in Bright Young Dead who have quite a role to play in The Mitford Murders. I think a re-read may be in order.

I thought I would jot down here a few thoughts about these two first books. You can read my review of The Mitford Scandal here. 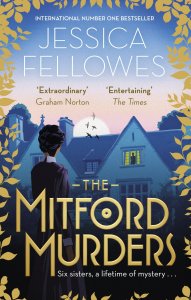 Blurb: It’s 1919, and Louisa Cannon dreams of escaping her life of poverty in London, and most of all her oppressive and dangerous uncle. Louisa’s salvation is a position within the Mitford household at Asthall Manor, in the Oxfordshire countryside. There she will become nurserymaid, chaperone and confidante to the Mitford sisters, especially sixteen-year-old Nancy – an acerbic, bright young woman in love with stories. But when a nurse – Florence Nightingale Shore, goddaughter of her famous namesake – is killed on a train in broad daylight, Nancy and amateur sleuth Louisa find that in postwar England, everyone has something to hide.

This first mystery is possibly even better than The Mitford Scandal, not least because there are shadows overhanging these bright young lives – Louisa’s background in crime and the First World War, culminating in the murder of a brave and caring woman which begins the novel. There is a stark contrast between the glamour of the Mitford family and their circle and the poverty and insecurity of Louisa’s life in London. She is in genuine danger from her uncle and there are a couple of scenes which are quite shocking and completely unexpected in a novel that one might assume to be cosy historical crime. Jessica Fellowes takes time to set the scene for Louisa’s entry into the lives of the Mitfords while also introducing us to Gus, the railway policeman who wants so much to prove himself. He didn’t fight in the war due to his debilitatingly poor eyesight and his brothers never allow him to forget his lack of service. So now he wants to serve in other ways.

I really enjoyed the descriptions of Gus and Louisa trying hard to work for a living in these post-war years. Their lives couldn’t be more different from those of the Mitford’s circle but Louisa is given a taste of that life through her work as Nancy Mitford’s chaperone and ‘almost’ friend. When Nancy gets it into her head to investigate the murder that opens the novel, Louisa has no choice but to go along. The cost to herself could be very high indeed. I found it all thoroughly engrossing. I loved the glimpses of high society while I was also fascinated by the ‘downstairs’ world of Louisa and Gus. Most of the Mitford girls are still in the nursery and so they have yet to come into their own but they are scene stealers even so. The novel is based on a true murder case and Jessica Fellowes blends fact with fiction in a most entertaining and atmospheric way.

Blurb: Meet the Bright Young Things, the rabble-rousing hedonists of the 1920s whose treasure hunts were a media obsession. One such game takes place at the 18th birthday party of Pamela Mitford, but ends in tragedy as cruel, charismatic Adrian Curtis is pushed to his death from the church neighbouring the Mitford home. The police quickly identify the killer as a maid, Dulcie. But Louisa Cannon, chaperone to the Mitford girls and a former criminal herself, believes Dulcie to be innocent, and sets out to clear the girl’s name… all while the real killer may only be steps away.

Now that I’ve caught up I’m not sure how I’m going to manage without my regular fix of Louisa, Gus and the Mitford girls, each of whom is both fascinating and appalling (in different ways). I find these books completely immersive and enthralling. Bright Young Dead, set in the mid 1920s, captures the mood of the day and contrasts the glamorous, decadent life of the flappers with the dangerous underworld of the poorer parts of London. The Mitford sister in the spotlight is now Pamela. Her eighteenth birthday party is to be a treasure hunt (a most popular activity at the time) but it is ruined by a tragedy – a young man falls to his death from the tower of the church that adjoins the Mitford home of Asthall Manor. Louisa, Pamela’s nursery nurse and chaperone, feels responsible. She had brought into the house a young servant, Dulcie, who was desperately trying to escape the clutches of a London gang of female thieves, led by the infamous Alice Diamond. But the girl is found beside the body. Stolen property is found in her possession. As Dulcie is tried for murder it seems to be an open and shut case. But Louisa is worried. She saw other people at Pamela’s party acting suspiciously. She will have to risk everything if she is to prove that Dulcie is innocent. If Louisa is right, then someone very close to the Mitfords could be a killer.

Bright Young Dead is every bit as good as the books that precede and follow it, with the added appeal that the novel is set in the mid 1920s, a particularly glamorous time. It’s all captured here as the elder Mitford girls flit between Asthall and London with Louisa in tow. Louisa is particularly interesting here as she observes how she is treated by the upper classes. She is resisting the idea of being in service. The Mitford sisters, and their parents, can be kind but they can also be carelessly cruel. While they attend the theatre, shows and dinners, far too often Louisa must stand outside the door or sleep in broom cupboards. The Bright Young Things are beautiful but they’re also appalling and their behaviour (and appearance) is wonderfully observed by Jessica Fellowes. Guy also receives attention as he begins to slowly develop his police career, alongside a woman police officer who has even more to prove than Gus has. It’s an interesting case with an array of intriguing suspects, all set against a backdrop that is at times glamorous and at other times is very ugly indeed.