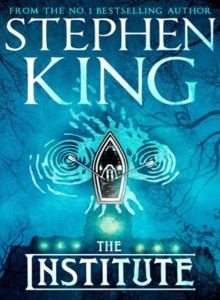 Luke Ellis is a remarkable child. Not only is he a genius to an extraordinary degree, he is also psychic. This ability has yet to emerge fully but it’s there, revealing itself in the occasional item that can move all by itself, and it’s waiting. Just at the moment when Luke and his family are making exciting plans for his next steps in a life that promises so much it is all snatched away. Luke is stolen in the night, his parents slain, and he wakes up hundreds of miles away in Maine in the Institute. There Luke discovers himself amongst other children with psychic abilities, some more advanced than Luke’s. They live under the control of Mrs Sigsby and her ruthless henchmen, whose mission it is to bring out the psychic powers of these children. The regime is brutal and the children are so in need of tender care and love. They receive the opposite. They are lab rats and their future is ended.

A new novel by Stephen King is always such an occasion. I always buy them and read them as soon as I can. I don’t get along with all of them, this is true, but there are a few that really stand out and The Institute is one of these. It isn’t really horror – although some of the things that happen in it are horrible – but a little bit more like science fiction, with a secret lab hidden away in Maine (how could it be anywhere else in King World?) full of abducted psychic children. For me, it had a similar feel to the time travelling 11.22.63. As that’s my favourite King novel this is a very good thing indeed. It did remind me a little of the X-Men stories but not enough to spoil its fantastic premise.

King is a master of creating characters, especially children, who are so easy for us to empathise with. They feel so real and natural, even though they exist in the strangest of places. Luke is a marvellous creation. He’s only twelve-years old, although mature for his age. He’s far too young to be dealing with all of this – the grief of losing his parents so horribly, his captivity, the torture, the loss of friends – but he still can act like a child. It’s hard for him not to behave among adults, even when they want to torture him. Watching Luke grow up before his time is truly disturbing and it’s very upsetting to read about what these children go through, especially 10-year-old Avery, who is so much younger than his years suggest. Avery broke my heart more than once.

The Institute, like so many Stephen King novels, starts brilliantly, and at a bit of a tangent. Before we meet Luke, we meet Tim, an ex-police officer, who appears to be wandering aimlessly until he takes on the job of ‘Door Knocker’ in a small railway town in South Carolina. This small community is superbly evoked by King. And then we leave it for Luke’s story and don’t return for a few hundred pages! Against all the odds, this really works.

The Institute itself is a place where terrible things happen and King goes to town describing the place, its rules, the people who work there, and the children who are confined there. The children are terrified, each dealing with it in their own way, but they’re also still children. They play and make friends, they care for each other and for the younger kids.

I did have a couple of issues with the book but they’re minor. I am really tired of King describing the size of the breasts of every female he creates (it’s totally unnecessary and gratuitous and once you’ve noticed it, it’s hugely irritating!). This annoyed me in The Outsider and it’s much more noticeable and irritating in The Institute. I also didn’t care for the mockery of someone with a speech impediment. It doesn’t matter that he’s a baddie, it just doesn’t feel right. Otherwise The Institute is nigh on perfect and classic King, with fantastic characters, a great story and some wonderful locations, in and out of the Institution. I adored the opening section and the novel builds and builds on it.

9 thoughts on “The Institute by Stephen King”