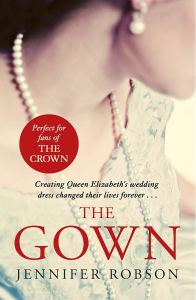 It is 1947 and the people of London, like those living in the rest of the country, still suffer from the effects of war. Food, fuel, clothing, not to mention all of those special luxuries, are strictly rationed and are in short supply. It doesn’t help that the winter is particularly harsh and dark and there is so little warmth to be found. And then comes the announcement from Buckingham Palace that Princess Elizabeth is to marry Philip Mountbatten. It casts a ray of light over the gloom. For Ann Hughes and Miriam Dassin the news is especially meaningful. They are embroiderers at the Mayfair house of Norman Hartnell, so beloved by the Queen, and the two women have been picked to embroider the princess’s wedding gown. All of the details must be kept absolutely top secret! But there is so much else going on in the lives of Ann and Miriam as their friendship grows, against the backdrop of a city scarred by war. Miriam, especially, has suffered. She is a survivor of the Holocaust.

In Toronto in 2016, Heather Mackenzie’s beloved grandmother has died, leaving Heather a box full of secrets. Heather’s nan never discussed her old life in Britain but Heather discovers a story that deserves to be told, hinted out by the box’s contents of priceless embroideries, so similar to those that adorned the Queen’s wedding dress when she was still a princess. But there is another mystery. How well did Heather’s nan know the celebrated textile artist Miriam Dassin?

The Gown is one of those wonderful books that arrives on my doorstep completely unexpectedly but fits my reading mood perfectly and couldn’t be more welcome. The novel is advertised as ‘perfect for fans of The Crown‘. I am such a fan and I think that this claim is wholly justified. I read The Gown in just one day, in one glorious sitting. I barely looked up from it.

There’s a little bit of an upstairs downstairs feel about The Gown. We’re given glimpses of the royals and other rich and influential people who breeze through the Hartnell showrooms but mostly we spend our time in the sewing rooms with the women who have to enter the building through the back entrance. Both Ann and Miriam are given glimpses of this other glamorous world in which rich foods can still be had in the grandest of restaurants, but most of the time we see them at work or in their small shared house that is also freezing as they have nothing to heat it with. We see the daily monotony of their lives which contrasts with the beautiful things that they create. But it doesn’t grind them under. They love their work. I really liked the harmony of the Hartnell sewing rooms. The women work hard but they aren’t taken advantage of. This isn’t sensationalist. It feels believable. And the result is a fascinating glimpse of life in a 1940s’ fashion house in Mayfair.

But what makes The Gown such a spellbinding novel is Jennifer Robson’s portrayal of these two women, Ann and Miriam. The chapters alternate between them. We get to know them both so well. Miriam, especially, is a brilliant creation. As the truth about her past slowly emerges, I was in tears. In fact, this novel made me a cry a couple of times. I love writing that can do that. I’m brought into a world and I feel it around me and here there is such emotion.

Scattered throughout are chapters set in the present(ish) day involving Heather. These sections don’t have the power or impact of those set in 1947 but they’re still enjoyable. I really liked watching Heather’s visit to London, which continues Miriam’s story. Miriam is such a presence in the book. I couldn’t get enough of her.

Jennifer Robson writes so well. We can feel the past being built around us. But be warned – there are some dark themes here (there is one scene in particular that I found shocking) and tears did flow, but overall this is such a warm tale of friendship, endurance and survival. The trauma of World War II hangs over events, as does the vulnerability of young women trying to make a living and home for themselves in the big, wide world, but there is also hope for the future, depicted most effectively with the symbolism of Princess Elizabeth’s wedding gown. The Gown is completely absorbing and engrossing and I’m so glad I read it.

3 thoughts on “The Gown by Jennifer Robson”