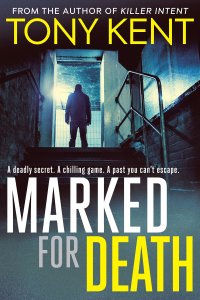 When a retired Lord Chief Justice is viciously slaughtered in his home, tortured and crucified, London’s legal establishment is shocked. And then another solicitor is killed in the same way. Someone, somewhere, is clearly out for terrible vengeance and Detective Chief Inspector Joelle Levy is given the job of finding out who that is and why. It’s not an easy task and matters aren’t helped when the most audacious and astonishing gangland killing takes place on her patch. One of the most well-known journalists of the day, Sarah Truman, investigates the crucifictions on her own as a worrying pattern emerges. Meanwhile, Sarah’s fiancé, QC barrister Michael Devlin is consumed by his own court case, in which he must prove the innocence of his client against enormous odds. But both Michael and Sarah have no idea how close the killer will come to their own lives. The clock is ticking.

I loved Tony Kent’s debut thriller Killer Intent and the good news is that its successor, Marked For Death, is every bit as compelling, if not even more so. I was so pleased to see Sarah and Michael return. Both have done well from what happened before. They’ve not only received promotion and admiration in their professions, but they are also now engaged and living together. It’s a good life. It’s about to get turned upside down.

As with Killer Intent, there’s an engrossing story at the heart of Marked For Death. The novel starts with a shock that sets the pace and mood for the rest of the novel. It doesn’t let up at all. There is so much going on as more than one thread weaves its way through the plot. We follow Sarah and Michael in their busy daily lives but we also have a killer to watch. It’s such a good story and Tony Kent tells it brilliantly well.

Sarah and Michael are joined in this book by DCI Joelle Levy and she is given plenty of space, meaning that we get to know her very well indeed. We get involved in her relationships with her fellow detectives, with her child and also with Sarah. I love the depth of character that Tony Kent gives us. It’s skilfully done as it doesn’t in any way distract from the plot. It keeps us invested in what’s going on and raises the stakes. We don’t want anything to happen to these people while fearing that it must.

The author’s legal background adds authenticity to his novels, especially for the character of Michael Devlin and his court case. There are some great moments of cross-examination here, with complex detailed argument (I’ll admit that I had to concentrate a great deal to follow the cross-examination about mobile phone masts!), which I thoroughly enjoyed. This combines so well with the thriller element of the plot outside the courtroom, although there is tension in both worlds. I was gripped by Marked For Death from the outset and it was a perfect read for the Christmas holidays. I just hope they’ll be more soon from this very talented thriller writer.