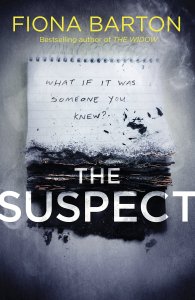 Alex O’Connor had saved for such a long time for a trip to Thailand to celebrate finishing her A Levels. While there she’ll learn the exam results which will start her off on the next phase of her life. With her is school friend Rosie Shaw, stepping in when Alex’s best friend couldn’t afford it in the end, and they are going to have the time of their lives! First in Bangkok and then touring around the country to experience its culture and beaches. But the day of the results comes and goes. Alex doesn’t phone home. Her regular emails have stopped. There isn’t a word from Rosie either. Both sets of parents are immediately worried and contact the police. DI Bob Sparkes is put on the case in the UK. He’s not the only one to be interested. Newspaper reporter Kate Waters is immediately on the case, not least because her own son Jake went silent in Thailand four long years ago.

The Suspect is the third stand alone novel by Fiona Barton to feature The Reporter – Kate – and The Detective – Bob Sparkes. I loved The Widow and The Child so much. They cleverly combine police procedural with psychological thriller and are driven by characters I can’t get enough of, namely Kate and Bob. As a result, these books go straight to the top of my reading pile and I gobbled up The Suspect just as soon as I could.

The Suspect is, in my opinion, every bit as involving and engrossing as the two that went before but there’s something extra in this novel. Kate is more implicated than ever before as she becomes a part of the story she is supposed to be writing. This is as much Kate’s story as it is that of the mothers of the missing girls. These women each go through their own personal torment. But it is also Bob’s story for an entirely different reason. His mind, like Kate’s, is very much on family but for him the case is almost a necessary distraction. At times, this is a very emotional read – the themes aren’t easy, no matter have engrossing they might be.

Much of the novel is set in Thailand and there’s such a real sense of gritty reality as we learn about Alex and Rose’s experiences and worry for their safety. The book moves back and forth in time as we also have Alex’s day-by-day contribution to the narrative. It’s so hard not to become caught up in Alex’s story. Her voice is so innocent and vulnerable. The narrators and perspectives of the book constantly shift and this drives the pace along, supported by such an excellent story. There are also moments of strong impact.

I loved the setting of the novel and I also enjoyed Fiona Barton’s treatment of its themes – family, guilt, suspicion, blame and unconditional love. Fiona Barton quickly became one of my favourite authors. I empathise so strongly with her characters. There is good in so many of them while in just a few she reveals the very worst. But life is complicated. Matters are rarely straightforward or black and white and that too feels like a realistic element in these hugely enjoyable and compelling novels.

Other reviews
The Widow
The Child

2 thoughts on “The Suspect by Fiona Barton”