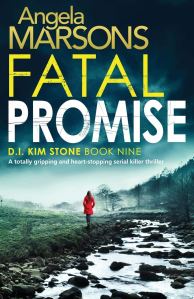 Fatal Promise, the ninth in Angela Marsons’ brilliant DI Kim Stone series, follows on directly from its predecessor Dying Truth, and, although much of its story stands alone, I really think you need to read Dying Truth first. For things have happened which mean that nothing will ever be the same for Kim Stone and her team and the impact of this will be all the greater for the reader who was left shocked by the ending of the previous novel. Having said all that, Fatal Promise does make it clear what has happened.

Kim Stone is almost recovered from her injuries and is returning to work. Not that she’s really ready. She has so much pain in her leg. But the pain in her heart is greater. She needs to be back with her team, now so much smaller than it was, and each of them feels as she does. But criminals carry on as normal committing their crimes, and it’s no time at all before Kim must find another killer. Gordon Cordell, a doctor involved in Kim’s last case, is found murdered in a local wood. Shortly afterwards, Cordell’s son is injured in a terrible car crash. Then the body of a woman is found. All of them have links to the local hospital. Stone doesn’t believe in coincidences. She knows that there must be a pattern and, now that the killer is getting a taste for it, there seems to be no end in sight. The pressure builds and it doesn’t make it any easier that a new team member is forced on Stone. There are some shoes that can never be filled.

I love the Kim Stone series so much, Angela Marsons is an extraordinary plotter. Her stories are deliciously complex and entangled and the way in which they come together is always never less than brilliant. The stories are peppered with twists that genuinely surprise and always work. They don’t feel forced and they’re all the more shocking for it. But the books also excel because of their characters. Kim Stone is a marvellous creation. She has a rage in her, she will catch the bad guys at almost any cost, she plays around with the rules, she can be immensely difficult, particularly to those who work with her or who are her superior officers, but she is loved and respected by so many. The loyalties that she has built up over the years continue to thrive and she can always find that useful favour to call in.

But alongside stubborn, determined Kim Stone we have her team – Stacey and Bryant – and they’re every bit as good to know. Bryant’s relationship with Stone is dealt with particularly well here, as is Stacey’s relationship with the new member of the team. Stacey, such a strong element of the series, is given time on her own here as she follows the clues to her own case involving a missing teenager. This is such a good story and complements the rest of the novel perfectly. Kim Stone is the mother hen who realises that she must allow Stacey some time to shine on her own. Everything is driven by very real emotions and motives. It all feels psychologically true.

Although grief is the dominant emotion of Fatal Promise, it is not a particularly gloomy book. There’s the usual wit and repartee. Angela Marsons writes so well. The dialogue feels genuine and believable, and it’s all the funnier for it. It’s also a corking story! There are so many red herrings. It’s such a satisfying puzzle. And I didn’t guess any of it. This isn’t a read to dally over. I read the book so quickly the pages almost turned themselves. Fatal Promise is another thoroughly satisfying novel from Angela Marsons. I don’t know how she does it! Time after time, she excels. We are so lucky to have this series.