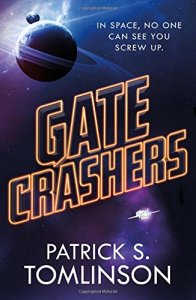 The Magellan or ‘Maggie’ is Earth’s first vessel to travel deep out of our solar system. It’s taken decades for them to reach this far, every year out another sacrifice for its captain and crew who will not see their families alive again. The only real time constant they have is a method of communication with Earth that is so advanced, it’s almost beyond their understanding. But otherwise Captain Allison Ridgeway and her crew are on their own. And then they discover the artefact fixed in space. It’s clearly non-human. It has unintelligible inscriptions on it. It’s just what the crew of Maggie has been after – the answer to that question asked by the people of Earth since time began: Are we alone in space? No, we’re not. Oh dear.

The technology of the artefact is extraordinary and, when Earth hears about it, the powers that be want to understand it, to recreate it, to make it their own. And so another vessel joins Maggie, this time using alien technology to reach the Maggie almost at once. As new and old spacefaring technology collide and they all finally realise the significance of this enigmatic, powerful artefact, survival becomes paramount. It appears that Earth has rather annoyed the creators of the artefact, it’s trodden on some toes and kicked off a rumpus that could have catastrophic consequences. The people of Earth might mean well but perhaps the rest of the universe can’t be bothered.

The premise of Gate Crashers is so fantastic, I couldn’t wait to read it. It fully delivers. I love a space romp with mysterious artefacts, even more so when they bring about that first contact with enigmatic aliens. But what makes Gate Crashers unusual and particularly successful is that here we have a science fiction novel that is full of humour and actually makes me laugh. This is really unusual! I’m a huge fan of the Hitchhiker’s Guide to the Galaxy novels and any attempt at humour in space since then has fallen flat for me. Gate Crashers clearly has the feel of a homage to Hitchhiker’s, while also going for the fans of the genial and wonderfully easy going spacefaring novels by Becky Chambers, but it also works in its own right. There are plenty of jokes here aimed at those who’ve read a lot of science fiction but, more than that, Gate Crashers is such an entertaining and warm space adventure with moments in it that made me roar with laughter.

The characters are fantastic, whether they’re human or not. Gung-ho Maximus Tiberius isn’t somebody you’d forget in a hurry, however much you might try, while the efforts of ‘Maggie’ to fit in with her crew are poignantly entertaining. It’s just as well that the aliens are in two or three or four minds over what to do with these humans. I really enjoyed the first contact element of the novel, especially when we realise what a bad job the humans are making of it. But the aliens we encounter here are an entertaining mix of species, all with their own issues and concerns, and some downright horrible and frightening. Suddenly the universe feels very big indeed.

There might be humour here but there’s also action and drama and the moments after the artefact is brought inside the Magellan are particularly tense. This is hugely exciting and it becomes even more so when we discover the meaning of the artefact. I think my jaw may have dropped.

Gate Crashers is a hugely entertaining space romp! It’s undoubtedly well-written and witty with some laugh out loud moments to treasure. Humans might be flawed but they’re not the only ones and so the result is a warm, humorous and thrilling look at what might lie in store for mankind once it breaks free of the solar system. I can’t wait!

I’m delighted to post my review as part of the blog tour. You can find other stops on the tour here: