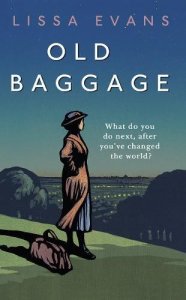 It is 1928 and Matilda Simpkin finds a small wooden club in a cupboard and with it comes a stream of memories that carry her back to the early years of the century when Mattie fought alongside her comrades for the suffrage of women. Matilda’s past is extraordinary – her deep-rooted unease around the police is easily explained by the abuse she witnessed and suffered at their hands as a suffragette. She keeps the medals which commemorate each protest, each imprisonment, each force feeding. But the fight was in the past. Mattie is lost and she is without purpose. But when she meets by chance a fellow suffragette she discovers that her old friend has been caught up in the flame of the growing movement of fascism. Suddenly Mattie discovers a new battle to fight – the need to educate girls and women of all ages and classes so that they can vote with awareness and knowledge. So that fascism will be defeated.

We first met Mattie in Crooked Heart, an exquisitely warm novel that took us to the last days of Mattie’s life during the Second World War, a life that helped to shape that novel’s young hero Noel. In that novel, Mattie played a relatively minor role but it was an unforgettable one. How good it is that now, several years later, we can enjoy Mattie’s company again, this time during her middle years when yet again her theories about education, the establishment and individual responsibility will have such an impact on the young people around her.

As Mattie sets up her band of Amazons (young women from all walks of life) on Hampstead Heath, in direct opposition to a fascist organisation of marching uniformed boys and girls, we become caught up in the hopes and aspirations of another generation of women. Women who, thanks to Mattie and others like her, will be able to have the vote, will be able to have dreams and possibly even fulfil them. We are introduced to a number of such memorable girls and women who are all inspired by Mattie. We pop into their lives and they are all so different and so utterly enchanting.

I fell in love with so many people in Old Baggage, not least of whom is Mattie herself. Lissa Evans writes so beautifully and takes us deep into Mattie’s thoughts and worries, her passions and her love, her self-doubt, and, most poignantly of all, the great losses she suffered during the First World War. The war ended ten years before but its legacy scars those who survived it. None of this is laboured – Lissa Evans presents it all with such skill and empathy, everything blended perfectly into the whole. The result is Matilda Simpkin, a woman who deserves and wins our love, for her heroism and her flaws. She is remarkable.

There are others I fell for here as well. Mattie’s companion Florrie (known as The Flea) is so beautifully and delicately drawn – she continues to carry out work for the poor, selflessly and at great personal cost. There are others we meet just briefly but their impressions last much longer. I loved poor Aileen especially. But the tragedy and sadness works so effectively because it is often masked by wit and humour, warmth and care.

Old Baggage is one of those fabulous books that reaches the heart, that makes the reader laugh and cry, sometimes on the same page. Writing this beautiful doesn’t come along every day and I cherished it. I can only hope that we meet Mattie once again, perhaps going even further back in time to those Suffragette years. There’s so much I want Mattie to tell us about her life! But if this is goodbye, I’ll not forget Matilda Simpkin.

Old Baggage is a timely commemoration of the bravery and sacrifice of suffragettes and suffragists but it also takes a look at what happened next, once these extraordinary women were reabsorbed into society during the aftermath of the First World War. It presents a beautiful portrait of Mattie, Florrie and their comrades while also celebrating the role of women as a whole, for whom there was and still is so much to do.