On 20 February, Titan Books published Embers of War by Gareth L. Powell, a brand new space opera that ticks all of the right boxes. You can read my review here and buy it here. To celebrate the publication, I’m delighted to host a guest post from Gareth in which he discusses the recent boom in space opera. As someone who loves space opera more than chips (how I need my books on spaceships and alien artefacts…), I couldn’t be more thrilled by the prospect of a boom and the next novel in Gareth’s series can’t come soon enough for me.

The Recent Boom In Space Opera

Like it or loathe it, space opera’s always been an important part of science fiction. Maybe even the heart of the genre. Whatever else may be going on, there have always been books about big spaceships, colossal alien artifacts, and vast interstellar wars.

As a sub-genre, space opera went through a bit of a renaissance in the late 1990s and early 2000s, with books by Alastair Reynolds, M. John Harrison, Stephen Baxter, Gwyneth Jones and others. Now, as we approach 2020 (itself an almost unbelievably futuristic-sounding date to those of us raised in the 1980s), it seems to be undergoing another dramatic resurgence.

In 2014, Ann Leckie’s debut novel, Ancillary Justice, won the Hugo, Nebula, Arthur C. Clarke, Locus and BSFA awards—the only novel ever to have achieved such a clean sweep. The sequels Ancillary Sword and Ancillary Mercy, and the related novel Provenance have followed it. The fact these books feature dark-skinned main characters in a gender-neutral society seems to have touched a nerve in ways not seen since Iain M. Banks’ Culture novels brought left wing politics into space opera back in the 1980s and 1990s, and opened the way for more diversity in the genre, both in term of subjects and authors.

Becky Chambers’ delightful 2014 novel, The Long Way To A Small Angry Planet, explores the complex relationships between a diverse human and non-human starship crew, including love between man and computer, an interspecies lesbian fling, and a creature caught in a symbiotic relationship with a parasitical virus. The sequel A Closed And Common Orbit continues to expand on these themes, and a new book is on its way.

In 2016, Adrian Tchaikovsky’s Children Of Time won the Arthur C. Clarke Award for its portrayal of the struggle between a starship carrying the last survivors of the human race and a civilisation of uplifted, intelligent spiders. Spanning thousands of years and following the development of spider civilisation, and the rise-and-fall of various human societies, the book has the epic feel of the very best space opera coupled with a visionary examination of what it means to be truly civilised.

Kameron Hurley’s dark and disturbing 2017 novel, The Stars Are Legion, has been jokingly described by its author as, ‘lesbians in space.’ In reality, it’s a savage, epic tale of tragic love, brutal war and revenge set amid a cloud of decaying organic world-ships, in which an amnesiac soldier sets out on a desperate mission that will either save or destroy the fleet.

Mathematician Yoon Ha Lee received the 2017 Locus Award, as well as Hugo, Nebula and Clarke nominations for his novel Ninefox Gambit, which follows the fortunes of a young military officer and the ghost of a disgraced, long-dead commander as they participate in inter-factional conflict in an Empire whose technologies and tactics are determined by consensual acceptance of the Imperial Calendar.

Since the publication in 2011 of Leviathan Wakes, James SA Corey’s ‘Expanse’ series — now on its seventh volume, Persepolis Rising (2017) — has been charting humanity’s rocky progress from being an interplanetary society centered on Earth, Mars and the asteroid belt, to an interstellar society of colonies scattered among fifteen hundred worlds. We see the upheaval through the eyes of the crew of the independent frigate Rocinante. They are drawn from various squabbling planets and ethnicities, but stay together because of the love they have for each other and the ship on which they live.

Taken together, these excellent books show that we’re currently living in something of a golden age for progressive, inclusive space opera. And it’s against this background that I launch my own series, starting with Embers of War, which was published by Titan Books on 20 February.

Embers follows the adventures of the former warship Trouble Dog, and her misfit crew of war veterans and cadets, as they race to rescue a liner that’s been downed in a politically sensitive star system. Featuring strong female leads, ancient alien mysteries, and some full-on space combat, I hope Embers of War can take its place alongside the books I’ve listed above, as part of the recent boom in space opera.

Embers of War by Gareth L Powell is published by Titan Books. You can find Gareth on Twitter @garethlpowell.

For further stops on the blog tour, please do take a look at the poster below. 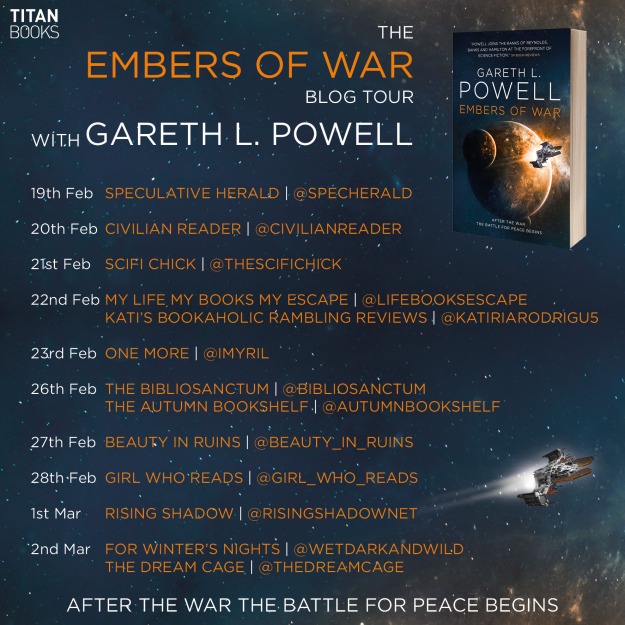 2 thoughts on “‘The Recent Boom in Space Opera’ – guest post by Gareth L. Powell, author of Embers of War”