Below you’ll find first a review from my recent re-reading of Murder on the Orient Express. Beneath it, there’s my report of one of the most extraordinary days I think I’ll ever have…

It is the early 1930s and there are few ways more luxurious to travel from Stamboul to London than on the glorious Orient Express. The train is full and so famous Belgian detective is fortunate to find a berth when a case he’s been working on calls him back to England in a hurry, curtailing a longed for time of rest among the wonders of the Turkish city. It is midwinter and after just a day and a night the train is stopped in its tracks by an impassable snowdrift. There is no choice but for everyone aboard to wait until help can arrive. But this can be of no concern to Mr Ratchett, the wealthy American businessman in the berth next to Poirot’s, for in the night he has been murdered, stabbed multiple times in his chest.

The passengers are trapped. And what a group they are, hailing from all over the world and from all walks of life, from an elderly Russian princess to a young English governess. Poirot has no doubt that amongst them he will find the killer, but which of them is it? And why are there so many clues? Too many clues for Hercule Poirot’s peace of mind.

I grew up on Agatha Christie’s novels and during my teenage years I read every single one of them (my young adult reading was Agatha Christie, Jean Plaidy and Arthur C. Clarke). Since then, I’ve returned to the Poirot books because these were always my favourites and, while Death on the Nile has always been the one I loved the most, Murder on the Orient Express has never been far behind.

The setting and circumstances of Murder on the Orient Express provide the perfect background for an Agatha Christie novel – the confined space, the exotic location, the limited number of suspects, the clever and seemingly unsolvable crime, the glamour, the passion. And while Agatha Christie demonstrates once more what a genius she was, the murder also gives Hercule Poirot one of his most perplexing cases as well as perhaps the biggest moral conundrum of his career.

I’ve read Murder on the Orient Express three times now and obviously I know who did it. I suspect there aren’t many who don’t – aided by the television and movie dramatisations of the novel over the years, including the most recent version directed and starred in by Kenneth Branagh. But somehow it doesn’t seem to matter. I enjoyed reading it again perhaps even more than I have done before. It didn’t hurt that I was reading such a beautiful celebratory hardback edition, or indeed that I actually carried it on to the Orient Express train itself, but it was a pleasure to read it in search of the clues. Knowing how it ended, I could observe Poirot at work as he interviews the passengers one by won and follows the clues.

There are elements that have aged less well than others, particularly in the regard of some characters for some nations. Snobbery is rife, class is everything, at least to some. But Poirot manages to bridge these cultural and social divides because he is an outsider and also because he’s more elegant and refined than the lot of them.

I thoroughly enjoyed spending time with this much loved novel again. I found Agatha Christie’s style refreshing, to the point, curt in places, but more often than not eloquent and elegant. It evokes a bygone world beautifully and so now the novel is as much a historical piece as a supremely successful crime novel. I enjoyed it for both and it inspired me to go back and re-read more. Hercule Poirot is extraordinary and it’s good to be reminded of this by rediscovering him where he was born – on the page.

On 2 November, I had a day unlike any other, all thanks to HarperCollins, Twentieth Century Fox and Agatha Christie Ltd. I can’t thank them enough because for one day I was treated like a movie star. I think I could get used to red carpets, five star hotels, premieres, and lots and lots of champagne. All the photos below were taken by me.

The day started with something I have always wanted to do – boarding the Orient Express train at St Pancras Station in London. I’ve seen the movie and obviously read the book and now here I was sitting in one of its plush seats in the glamorous bar carriage, listening to James Pritchard discuss the legacy of his great grandmother, Agatha Christie. Across the carriage was Agatha Christie’s portable typewriter. The last time it had been on the Orient Express it had been with her. 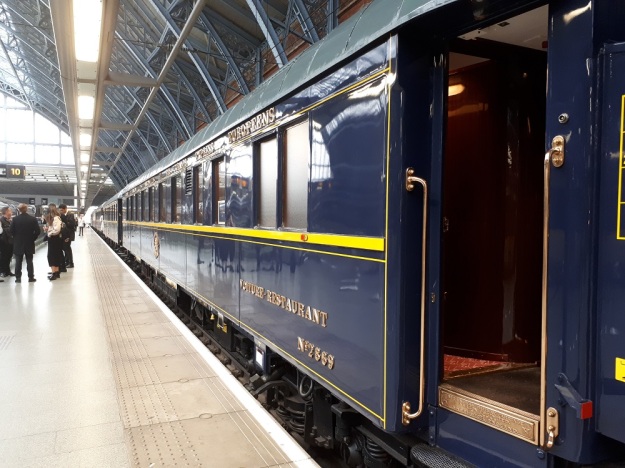 It was good to hear that more adaptations may follow Kenneth Branagh’s Murder on the Orient Express. But the overriding impression I was left with was how incredible and intrepid Agatha Christie had been – to have travelled across the world on her own in a time before television to places that she could not have fully imagined in advance. I’ve always been interested in the story of Agatha Christie’s expeditions with her archaeologist husband Sir Max Mallowan but she did so much more than that. Agatha Christie and her husband are buried in the beautiful village of Cholsey, not too far from me, and I regularly pay my respects.

The premiere experience at the Royal Albert Hall was unforgettable. I’ve been to a fair few premieres due to my movie blogging years but this was the first time I’ve been to one as a guest and it was incredible. With my special pass, I was able to access the areas with the stars and so watch them all be interviewed on the red carpet stage by Lorraine Kelly. It seems a long time ago since I used to go and see Kenneth Branagh on stage with his Renaissance theatre company. Now look at him! I was particularly thrilled to see Daisy Ridley and she looked beautiful. 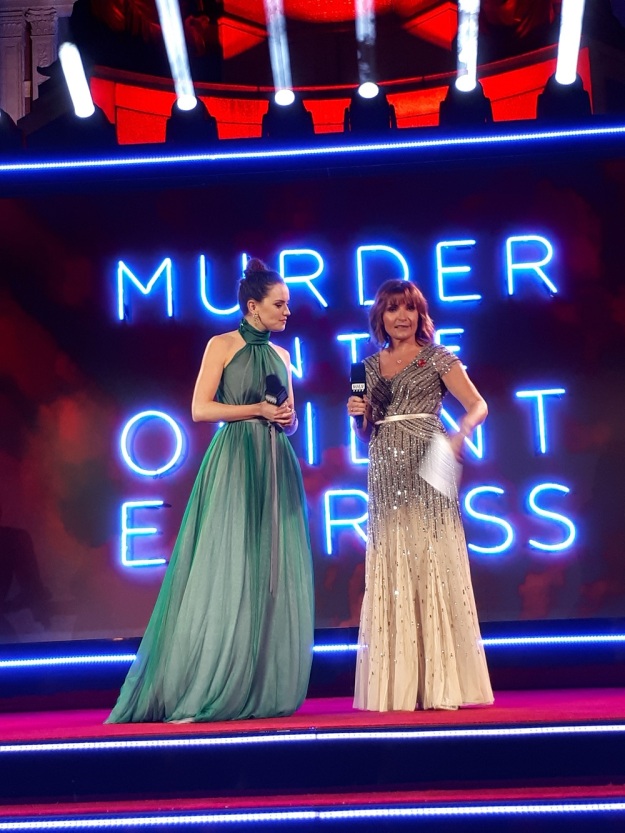 The film itself was thoroughly entertaining although I was a bit overcome by the atmosphere inside of the Royal Albert Hall (I collected my degree in the Hall in another century and this was my first time back), the occasion, the sound system and by the amount of champagne. I was interested in the ways in which the film veered from the novel but I thought that the addition of the viaduct and the use of the outdoors for one of the most important scenes were inspired. I thought Branagh was fantastic as Poirot – completely different from David Suchet and Albert Finney (certainly from Peter Ustinov). This Poirot is a man of action as well as a genius with his little grey cells. The practicality of the moustaches is another matter entirely. 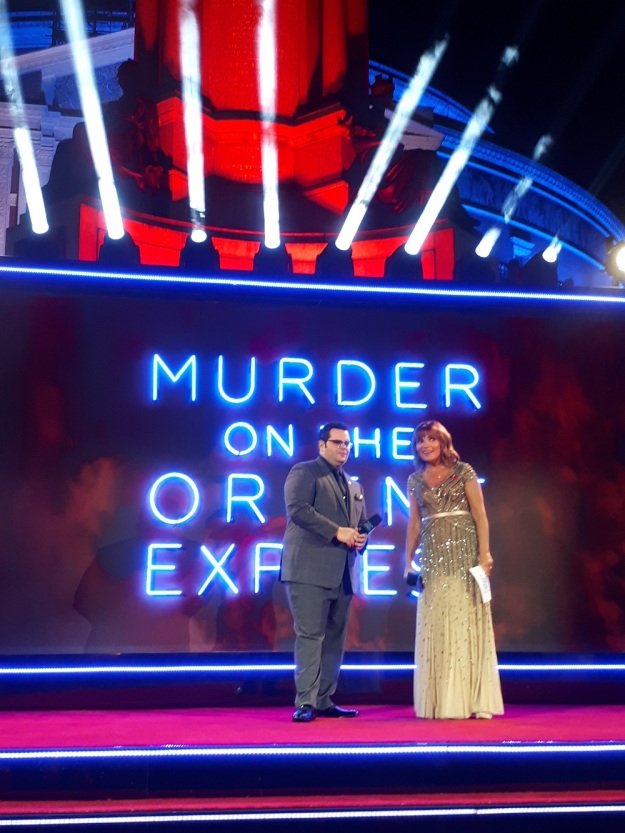 An extraordinary day and one I’m so thrilled and grateful to have experienced. It means a lot to me that this was all to celebrate Agatha Christie, an author who has played such a significant part in developing me as a reader and lover of books. Many years have passed and it’s so good to think that films such as this may give new generations a nudge to read and love Agatha Christie’s mysteries, just as their parents and grandparents have done. 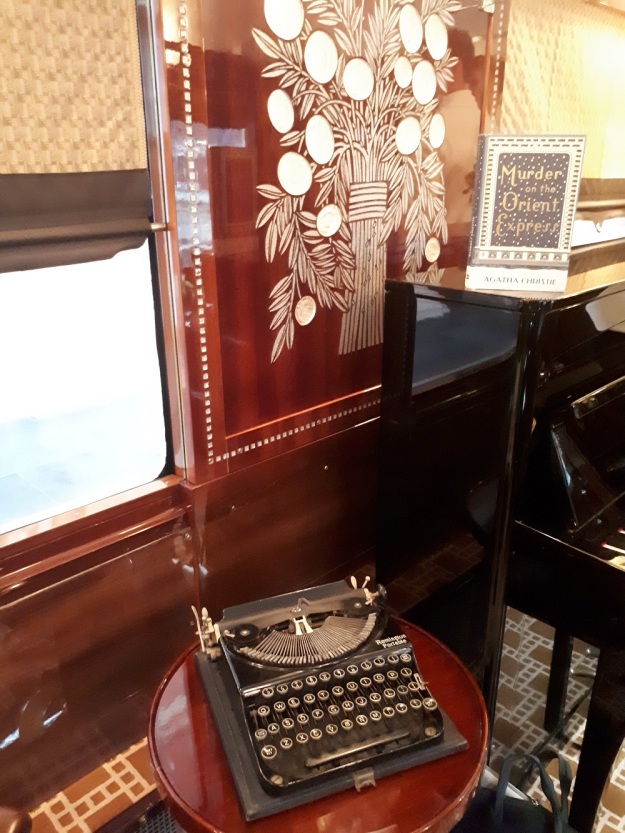 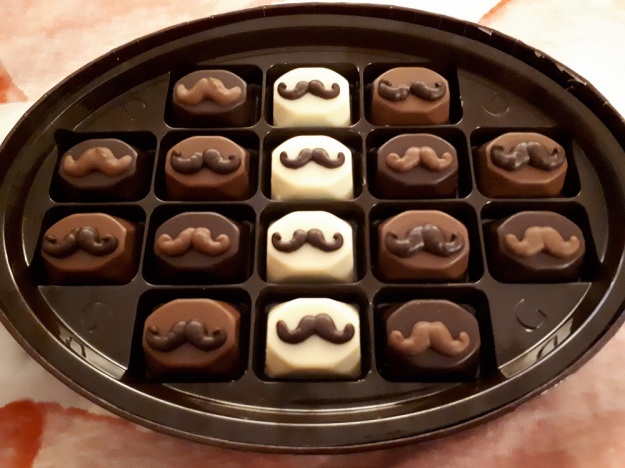 16 thoughts on “Murder on the Orient Express by Agatha Christie”