Onslaught is the middle book in Anthony Riches’ new and really rather brilliant trilogy on the Batavi Revolt of AD 68-70. Although, if you really had to, you could read this without having read the first in the series, Betrayal, I don’t recommend it. Onslaught follows on from Betrayal perfectly so do read that one first. This review assumes that you’ve done just that.

It is AD 69 and Rome’s problems extend far beyond the grumbling tribes of Germany – the new emperor Vitellius is in trouble already, with Vespasian threatening from the East. As a hugely respected soldier and general, Vespasian is a popular choice for several of the legions and so the Roman army is split. And when some of the most experienced soldiers are marched south from the Rhine to join Vitellius’s forces against Vespasian, the ones left behind are extremely vulnerable to the might of the Batavi. Once bodyguards to the emperors, the Batavi haven’t forgotten the shameful way in which recent emperor Otho dismissed them from his service and sent them home. Their rebellion, led by prince Kivilaz, has gone quiet after their victories of the year before, but this is merely a lull. And the prospect of Vespasian on the horizon has given Kivilaz just what he needs to tear the Romans apart.

Onslaught brings us the story of the Batavi Revolt through four centurions – Marius, Antonius, Alcaeus and Aquilius – as well as their superior officers and the men that they command. Once all four fought on the same side, especially in Britannia, but now they oppose each other in civil war. The action moves between the camps that line the Rhine, the Roman border, which goes right through the tribal lands of the Batavi. Old Camp is particularly vulnerable and it is there that the Batavi decide to attack.

This is thrilling stuff. Tension, fear, martial prowess and incredible courage are all on display here as we move up and down the Rhine, following the marching, disciplined Batavi troop – who, as soldiers, are in a way more Roman than the Romans – as well as watching the Romans prepare for a siege. Because we are drawn into both sides of the conflict, we care for soldiers on both sides. Our sympathies really are split, at least on an individual level. There are people here we care for – they banter, they squabble, they give each other nicknames, and they all have to bury friends. This is an enemy with a face, no matter which side you’re on. It raises the stakes.

You do have to have your wits about you when reading Onslaught. There is a lot of moving around and it can be quite difficult, at least during the first third, to keep track of who’s who. There are some similar people and place names as well. But this is not a simple story, happily, and if you take the time and effort, it’s very rewarding. There is, though, a very useful dramatis personae at the beginning as well as a couple of handy maps.

I love sieges in Roman military fiction and this is one of the very best. Anthony Riches knows his Roman military history inside out and we reap the benefits of that here. Every time you think that the siege couldn’t get any more difficult or desperate, the level is raised once more. This is brutal and it’s bloody. But I also felt that I was learning a great deal about Roman warfare, especially its weaponry and tactics, which I really enjoyed and appreciated. Combining this with exhilarating action, I did not want to put Onslaught down at all. I also liked very much the added political element, going on behind the scenes, of the fight for the empire between Vitellius and Vespasian.

Anthony Riches doesn’t pull his punches, nor does he mind throwing in a few shocks. You can’t count on any of these characters making it through to the end, so I did take a few blows to the heart. But this is war, after all. There was one moment that really made me think, when one of the centurions has to decide how to treat men who have had enough and don’t want to fight anymore. This is not black and white. These are three-dimensional characters and their personalities shine even though they’re hard at work most of the time just staying alive.

Retribution will complete the trilogy next spring and I can’t wait. You only have to look at the list of reviews below to see how much I love Anthony Riches’ work. His Empire series, which I adore, now has a rival for my affections in The Centurions.

Other reviews and features
Betrayal: The Centurions I

2 thoughts on “Onslaught: The Centurions II by Anthony Riches” 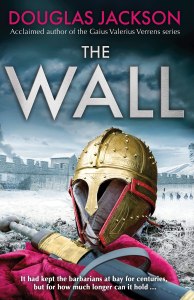