Earlier this month, Headline published the latest novel by Gill Paul, Another Woman’s Husband, a novel that brings together the stories of two significant women in 20th-century British royal history – Wallis Simpson and Diana, Princess of Wales. I’ll be posting my review in November for the paperback release, but, in the meantime, I’m delighted to host here a guest post from Gill in which she discusses the historical sources for her novel.

First, a little about what Another Woman’s Husband is about:

Two women, divided by time, bound by a secret…

1911. Aged just fifteen, Mary Kirk and Wallis Warfield meet at summer camp. Their friendship will survive heartbreaks, continents, and the demands of the English crown, until it is shattered by one unforgivable betrayal…

1997. Kendall’s romantic break in Paris with her fiance is interrupted when the taxi in front crashes suddenly. The news soon follows: Princess Diana is dead. Trying to forget what she has witnessed, Kendall returns home, where the discovery of a long-forgotten link to Wallis Simpson, the Duchess of Windsor, will lead her to the truth of a scandal which shook the world…

When I decided to write about Wallis Warfield and Diana, Princess of Wales, both of them controversial women, the first choice was which of the dozens of books about them both I could trust. Back when I was studying history at uni, we were taught to question sources. Who wrote it? What audience were they writing for? What were they trying to achieve by writing? What information did they have and what did they not know?

Sometimes it makes sense to read the most recent biographies first, since you can assume their authors have read the preceding ones. Anne Sebba’s That Woman is a brilliant read and highly recommended, although I don’t agree with her assertion, originally proposed in Michael Bloch’s biography, that Wallis suffered from Androgen Insensitivity Syndrome. The evidence for this seems flimsy: large hands, male bone structure, deep voice. None of her lovers ever reported that she had male characteristics in her genitalia; she was clearly a sexually confident woman so it seems to me a curious leap to make.

The first-ever biography of Wallis was written in 1937 by a woman called Edwina H. Wilson. Wallis suspected Mary Kirk of having collaborated with the author, but I don’t think she did. There would have been far more detail in the childhood sections if she had, and surely a more negative view of her character, since it was written the year after Wallis and Mary fell out.

Wallis’s autobiography, published in 1956, is fascinating because it allowed me to hear her voice, but it contains a lot of revisionism. For example, according to her, Ernest was present when the Prince sent an on-board telegram just as she embarked for New York in March 1933. He wasn’t, and it was a clear sign of the Prince’s personal interest in her at an early stage. Wallis tries to make out that until the summer of 1935 his friendship was more with Ernest than with her – but I beg to differ.

Mary Kirk is all but written out of Wallis’s autobiography but I managed to find a biography of her, written by her sister and niece. It’s a short, self-published, photocopied transcript of letters that Mary wrote to her sister Anne, and replies that her sister imagines she might have sent, along with interspersed explanations. A strange book altogether, but immensely valuable to let me hear Mary’s voice and the phrases she used, such as “rich as mud” and “I’m on the outs with Wallis”.

When it comes to Diana there is as yet no academic, properly verified and footnoted account of her life, although she richly deserves one. Andrew Morton is the obvious starting place when it comes to biographies, as he is immensely well connected in royal circles even twenty years after Diana’s death. But his bestselling book was secretly based on interviews with Diana herself, was written as her marriage was imploding and had her seal of approval, so it clearly had its own agenda and its own bias.

I decided not to write about Diana as a character but to let her be a ‘ghost’ in the novel, while others investigated the circumstances of her death. My time frame was very tight – 30th August to 28th December 1997 – and I had to be careful not to include information discovered after that date, which Alex in the novel wouldn’t have known about. I watched the Panorama documentary made two weeks after the crash, as well as the ITV and Channel 4 ones made the following year. Martyn Gregory’s account Diana: The Last Days seemed the most trustworthy of dozens of books about her death – not least because he lists his sources in endnotes – and with his help I pieced together a timeline of when information was revealed. I couldn’t include the strange story of James Adanson, a paparazzo who may or may not have been driving the white Fiat and who died soon after the crash in mysterious circumstances… But I think there were already enough anomalies to give Alex plenty of material for his own fictitious documentary.

Other posts
Guest post: Gill Paul, author of No Place for a Lady, ‘on feminism, bereavement and squeamishness’
A review of The Secret Wife

For other stops on the tour, please take a look at the poster below. 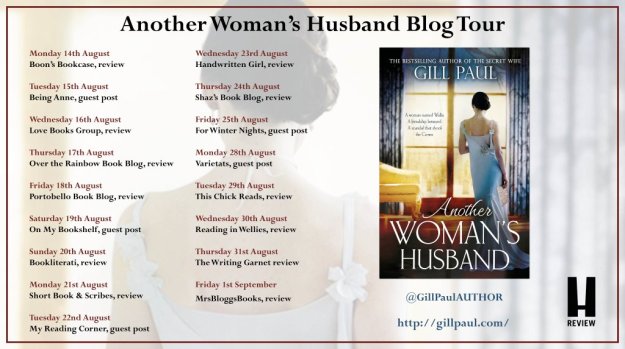 2 thoughts on “‘Historical sources for Another Woman’s Husband’, Guest post by Gill Paul”