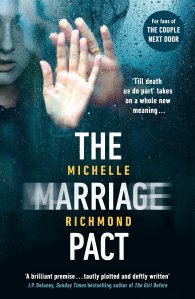 Alice and Jake are the perfect couple – young, attractive, with fine careers ahead of them. Alice was a singer in a successful rock band but now she’s an up and coming lawyer while Jake is a partner in a growing psychology practice. They’re ready to get married. On the spur of the moment they invite one of Alice’s wealthy clients to the wedding. He loves weddings, he tells them. His gift is unexpected – an offer to join something called the Pact.

The Pact, Alice and Jake learn, is a society of like-minded couples who want nothing more than to achieve the perfect marriage. It lays down a few rules that are designed to bring the couple closer together and every few months everyone gathers at a Pact party to celebrate their marriages and friendships. It all sounds positive and Jake and Alice desperately want their marriage to work. Jake spends much of his time counselling couples on the verge of divorce. He knows better than most that a relationship takes commitment. Perhaps they could do with the help. So, with only a cursory glance at the paperwork, Jake and Alice join the Pact. And so begins a descent into a hell of their own making.

What follows is something from the realms of horror that, as reviewers have noted, has elements in common with The Stepford Wives. For the Pact is nothing but a sinister cult. It might be glamorous on the outside but its core is rotten through and through. The lengthy manual that Jake and Alice are given lays out the code and any infractions are met with punishments of increasing brutality and humiliation. Jake and Alice are trapped and what happens to them is appalling.

The Marriage Pact is undoubtedly one of the most gripping novels I’ve read this year. It’s a rollercoaster ride of suffering for Jake and Alice but it’s a thrilling read for us as time after time we wonder what could possibly happen next. The movement from the beginning to the end is staggering, so much has happened. The members of the Pact are successful members of society and it’s all stripped away before our eyes.

There is a fundamental issue with The Marriage Pact that you have to get past in order to enjoy it. Its premise is completely preposterous and unbelievable. This is compounded by the fact that Alice is a lawyer – why didn’t she read the contract? And the incredible resources that the Pact has in its power are just that – incredible. Everything feels that it is held together purely by compliance and submission. I wanted to shake these silly people from start to finish.

But, if you can get past this as I did, then you’ll have a lot of fun with The Marriage Pact. It’s well-written and there are sections of this novel that were golden to me. These bits, for me, weren’t part of the main plot but to do with Jake’s job as a psychologist. The novel is narrated by Jake and he likes to tell us about his day, giving us facts and figures, for example, about marriage as well as anecdotes about coming to terms with one’s past. I found some of these sections extraordinarily powerful and I actually took some tips away from it! Some of the book’s ideas went far deeper than I was expecting.

I also enjoyed Jake and Alice. It’s easy to feel irritated by Alice but her character is an interesting one and I was desperate for her to wake up. Their relationship, though, feels genuine and I did care what happened to them. The spiral into hell that is The Marriage Pact happens fast and it is very hard to put down. The ending has divided reviewers and I can’t say that it was entirely satisfactory for me but I can’t imagine how else it might have ended so I’m happy enough with it. This is a novel with fine writing and huge energy and heart and within were significant little nuggets of gold which I’ll carry away with me.

I’m delighted to post my review as part of the blog tour to celebrate the publication of The Marriage Pact. For other stops on the tour, do take a look at the poster below. 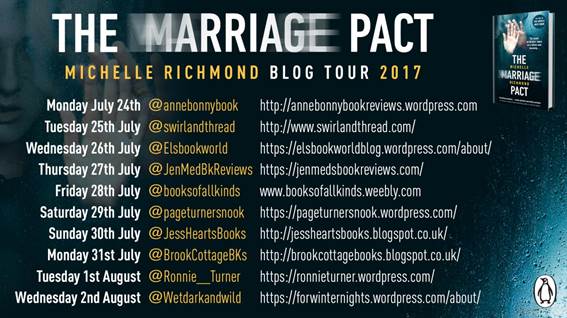 2 thoughts on “The Marriage Pact by Michelle Richmond”