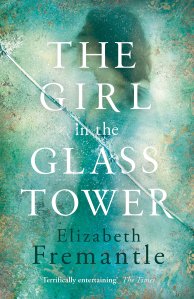 Lady Arbella Stuart was the Queen England so nearly had. Cousin to Elizabeth I, a descendent of Henry VII, Tudor blood running hotly through her veins, she was also the granddaughter of the indomitable Bess of Hardwick, the Countess of Shrewsbury. And Bess was determined to work the court, influence the mighty Cecil, to ensure that, when the time came for the ageing Elizabeth I to accept that her fate could be no different from that of any other mortal, Elizabeth would pick Arbella as her heir. Their other cousin, James VI of Scotland, son of the vanquished, beheaded Mary Queen of Scots, has his own eyes set on the throne, not least because he has one advantage over Arbella Stuart that she can never take from him – James is a man.

Arbella is a victim of the ambition of those around her. She turns from child to woman as a pawn in their game. The extent of their schemes only becomes apparent bit by bit, as Arbella struggles to hear news from court. The plot of the Earl of Essex has so incensed Elizabeth against any perceived rival to her throne – to any reminder that she will and must die – that she banishes Arbella from court. The court turns on its conspiracies and suspicious thoughts, Catholicism beginning to raise its head over the parapet, nobles shifting in their precarious seats. James is at the centre of much of it, but Arbella increasingly finds herself its victim, as planned marriages come and fade away, and she becomes little more than a prisoner to her grandmother and her Queen.

In The Girl in the Glass Tower, Elizabeth Fremantle once again picks the story of a fascinating, important and yet overlooked Tudor woman to tell. Although each novel is independent, there are echoes of the other novels, particularly in the shadow of the Lady Jane Grey’s equally tragic sister Katherine Grey (Sisters of Treason), whose bed Arbella must sleep in, and the resilient Penelope Devereux, sister of the Earl of Essex (Watch the Lady), who is one of the few to offer genuine friendship to the young woman. Arbella is likewise determined, well-educated, loyal and, given the chance, loving, but in The Girl in the Glass Tower we are shown just how little power this most noble of women had. How little any other woman would have cause to envy her. We follow her life through the years and it is painful and pitiful to watch the ways in which she tries to control her life, by controlling her body, making it undesirable, untouchable and touchless. This is a forceful portrait of a woman who has no choice but to make the best of her lot and the fact that, when she does stir this costs the lives and/or the well being of the few who love her, is not lost on Arbella Stuart.

But Arbella is not the only woman featured here. The novel is divided between Arbella’s story, told in the past tense, and that of another historical figure Aemilia Lanyer (Ami), a writer and poet, told in the present. Ami became a friend of Arbella’s before Ami fell from grace from the court of King James for her woman’s defence of Eve. Ami’s story is very different. She too has a struggle to stay independent but this is much more a matter of financial survival. But her memories and thoughts of Arbella give her both comfort and guilt and they also provide us with a fascinating portrait of James’s court and his Queen, two figures almost completely overshadowed in fiction by their glamorous Tudor predecessors.

The Girl in the Glass Tower is beautifully written, as you’d expect from Elizabeth Fremantle. Also just as you’d expect, it is full of psychological insight and empathy. I really enjoyed the way in which Ami is shown to exert her influence over the people who want to grind her into the dust. Likewise, I admired Arbella’s fortitude. Arbella’s story isn’t a happy one, this is a melancholic novel, but I did find that Arbella always kept her distance from me, keeping me from becoming too emotionally attached to her destiny. When she falls in love, the echoes of Katherine Grey are particularly strong. I found Ami much easier to empathise with, although, at times, harder to understand.

Much of the action of the times takes place on stage while we spend most of the novel in the wings or backstage, or even out of the theatre altogether, with Arbella and Ami. We do enjoy a couple of visits to court but otherwise events pass Arbella by and, like her, we have to rely on the letters and visits of others to her isolation, far from London. This does make for a slower pace at times but it is a colourful, rich one. I enjoyed the literary allusions, to Shakespeare and others, and the spectacular glimpses we see of this fascinating, charismatic, uncertain era. I love how Elizabeth Fremantle throws a whole new light on this age by focusing on some of the lesser known female figures. Lady Arbella Stuart deserves to be remembered.

As a footnote, I must comment on the title. I’ll be very happy when ‘The Girl’ is banished from the titles of books about women. Otherwise, this is a very attractive hardback.