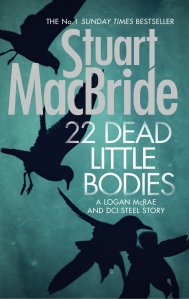 Something a little different this time – in response to my ongoing binge reading of one of my latest discoveries: Stuart MacBride and his fabulous crime series featuring DS, and sometimes Acting DI, Logan McRae, responsible for keeping the peace in Aberdeen. Who would have thought that Aberdeen was such a murderous, dangerous and rainy crime hotspot? My eyes have been opened. I’ve not yet read all nine of the series, far from it, and I’m also approaching the series from both ends. This is because I’m a bit contrary but also because I read the latest – The Missing and the Dead – first. I firmly believe that for a series (as opposed to a trilogy) of any genre to be good, it stands up to pick and mix. This certainly holds true here. I read the ninth book, adored it, and then immediately bought a whole bunch of them and read the first book – Cold Granite – next before then reading the eighth 22 Dead Little Bodies (a review copy). I’ll next read the second book, The Dying Light and who knows after that. In fact, I love this series so much that I accidentally bought two copies of book four. This shouldn’t matter as I’ve since heard that this book is even better the second time round. 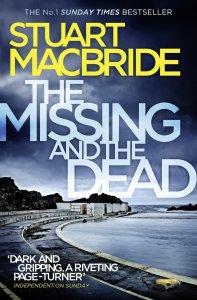 With three books read, five more to go, and a new one on the horizon in the New Year, I don’t want to do reviews as such. So instead I thought I’d clump together the ones I’ve read and tell you a little about why I think this series is so flaming marvellous, without giving away any plot. I’ll just say that the plots are great. They’re not for the squeamish. The murders are often horrific and Stuart MacBride isn’t in the business of sparing us the frightening details. The victims are often the most vulnerable. But there’s much more going on. The murders take place within the context of a city with perhaps more than its fair share of criminals, thugs and chancers. Logan is a relatively senior officer in an extremely busy police department. In the later books in particular, to say that Logan and his team have their hands full is putting it mildly. Lots of criminal balls are juggled at once, while Logan, his officers and his bosses also have to deal with the media, the public (who like to throw all manner of red herrings under their feet), and a fair few personal issues and relationships, some of which cause heartache and sacrifice, while others help them through the day.

The success of the Logan novels is a result of far more than the excellent plots and the novels’ formidable, expert structures. The series is addictive and habit-forming largely because of the fantastic characters, their interaction, and the writing, which manages to shock while also making the reader, at least this one, laugh out loud, frequently.

This style has developed over the books and a good reason for this is probably the increasingly dominant presence of Logan’s DCI, Roberta Steel. Steel is, with no doubt at all, an utterly appalling woman. There’s barely a moment when she’s not having a good old scratch, hurling abuse, flirting or trying to get out of something by making Logan do it instead. She is priceless, irrepressible, and the banter between Steel and Logan is thoroughly entertaining. It is possibly true that at times she becomes too much and the banter takes over, especially in the later books, but I can forgive her an awful lot. She must be such fun to write. The relationship between Logan and Steel dominates the later books in a way that makes the earliest books very different. 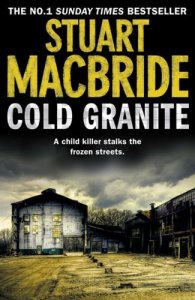 In Cold Granite, an addictive and disturbing novel about a child killer, Steel is barely there. In her place is DI Insch, a man who is never happy unless he has a bag of sweets to munch, and who I found deeply fascinating and such a sympathetic character. There are other characters that we meet in this first book who are no longer around later on and it is one of the reasons why I have to keep reading. Knowing what Logan is going through in his personal life in the later books is a compelling force for me to turn those pages. And these, with the notable exception of the very short but very good and very powerful 22 Dead Little Bodies, are fabulously satisfying, meaty long books.

Having read the latest and the first, I can confirm that these books are very different from each other. The later novel is busier, more humorous and yet also darker. The first, Cold Granite, is more focused on its main case. However, from the very beginning the dominance of the characters is important, the back history of Logan carefully presented, the beginning of new relationships laid out. By the time we come to The Missing and the Dead, Logan’s life has changed completely, as has his role. What went on during the ‘middle books’ is a mystery that I have yet to discover and enjoy.

When I started falling for the Logan series I heard the term ‘Tartan Noir’ for the first time. It is most definitely true that Stuart MacBride is a master of it but the appeal of this series goes far beyond labels. Brilliantly written, fantastically plotted and structured, and full of life, humour, bleakness and death, they offer me the perfect promise for those long wintery reading nights. I look forward to curling up with the rest of the series and, no doubt, I’ll be back to let you know how I’m getting on.