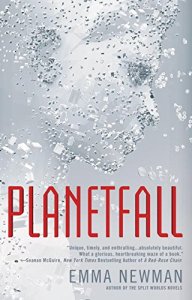 It’s twenty-two years since Renata Ghali and her fellow crew members followed Lee Suh-Mi, the Pathfinder, to a distant planet that offered hope to the people of Earth as well as a new home. Renata, or Ren, and the others live in a colony of domes around the base of an alien structure known to the colonists as God’s city. Science lives alongside faith and both mean that the settlers now lead contented lives, able to breathe the air, inhabiting organic, beautiful living and breathing homes, each person guided by a purpose. Ren is the colony’s 3D printer engineer, gathering the waste and producing functioning items from it. She, along with Mack, to all intents and purposes the leader of the settlement, are greatly respected, not least because they know better than any the genesis and history of this extraordinary achievement of giving mankind a place among the stars.

But where there is knowledge there are also secrets. Only Ren and Mack know the truth about what happened shortly after Planetfall. Only they know the truth behind the colony’s belief that the Pathfinder, Suh, is working for their cause deep within God’s city. They wait for the day when she will walk out of the structure and tell them what the beings want that guided them to this place. Then one day a stranger appears in the wilderness outside the gates of the colony. Sung-Soo is a young man, he can only have been born on the planet, and he looks an awful lot like Suh-Mi. He is embraced by the whole community while he in turn clings to Ren. It is soon clear to Ren and Mack that this young man’s increasingly urgent questions about the past might bring the colony to its knees.

Planetfall is an utterly captivating, beautifully written and imagined novel from start to finish. The new planet is stunningly visualised, both the living wilderness outside the gates as well as the homes within the colony itself. The descriptions of these biological pods, the epitome of recycling, is wonderful. When we are taken into Mack’s home with its aquarium walls, I wanted to move in. The pods are built to reflect the personality of the person who lives inside and we see the process as Ren builds a home for Sung-Soo. There is a ritual to this just as there is ritual behind so much of daily life for those living beneath God’s city. As for God’s city, it is brilliantly done. Ren is able to squeeze herself into its strange, moving, pulsing walls. I could barely breath for the claustrophobia that weighed down these passages and shared in her relief when the structure squeezed her out like an egg or a newborn.

Ren lies at the heart of Planetfall just as God’s city lies at the heart of the planet. We are slowly drawn so deeply into Ren’s life. We witness her memories of the last days on Earth, her relationship with Suh-Mi and the origins of the colony and, as the novel proceeds, we watch the attitudes of the other colonists change towards her. I felt so close to Ren. It is a remarkable psychological portrait and Emma Newman is to be congratulated for it. It feels almost like therapy, a process that must be undergone, as the layers are peeled away and we and Ren are faced with the truth. It is an agonising process for Ren and it’s mesmerising for us.

Without doubt, Planetfall is one of the finest novels I’ve read this year. It’s one of those books that defies genre and demonstrates all that is wonderful and important about science fiction. It is an immensely rewarding, powerfully emotional read. The flashbacks to Earth provide a memorable contrast to this new life under different heavens. The society is evolving but at what cost? There is an Eden feel to the colony, a religion built around Planetfall and the Pathfinder, science and faith working together, but, despite the truly strange and enigmatic alien structure and the mystery of its call to humanity, Planetfall is at heart a novel about the human condition and the struggle of one woman to find her way through life when circumstances call her to account. I cannot praise this book enough and I urge you to read it.

My grateful thanks to David for this marvellous book! Here is David’s review.