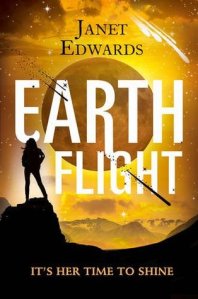 Review
Earth Flight is the final novel of the Earth Girl trilogy. Please don’t venture any further into this review if you don’t want to hear things about Earth Girl and Earth Star.

Hundreds of years after the first Earth Flight took much of humanity away from the home planet, populating other worlds, moving between them through portal technology, Earth remains little more than Hospital Earth, the home for those who are allergic to other planets. Many of these people, known as Apes to the Norms who live ordinary lives among the stars, were abandoned on earth by their spacefaring parents, left to the care of ProParents, state schools and homes. Earth itself has never recovered from a disaster centuries before that robbed it of technology. Now, human – or Ape – life is confined to safe shelters, the outside is a dangerous place, its ruined cities reclaimed by nature. The only people to venture into it in the 29th century are archaeologists searching for clues to what has been lost. Famous among them is Jarra, the young woman (an Ape) who is known for her courage in saving her colleagues caught in the greatest of dangers and also for being able to answer that most tantalising and exciting of all objects: a curious alien probe.

Now promoted to a high military rank, Jarra is among the team investigating the alien artefact. But she has become much more than an archaeologist and soldier. She has become a symbol of hope and equality for all Apes, also labelled as disabled and non-human, just as she has become an object of wonder for those who thought that Earth no longer had relevance for the future of humanity. Both Jarra and the aliens may well be about to prove that wrong.

In this final novel, Jarra’s life is coming together despite the regular blows and set backs – she is in a happy contractual relationship with Fian (a ‘Norm’) and has been accepted into the clan of her parents, inhabitants of the planet Beta. While much of the novel, especially the latter stages, focuses on the mystery of the alien artefact and the scientific potential of this discovery for people such as Jarra, most of the first half has Jarra and Fian at its heart, building up to a key event in their young lives – their betrothal. Although this is to take place on Earth, its witnesses hail from distant planets, making it an enormously significant affair. But Earth Flight, as with its two predecessors, is both an exciting action adventure and a turbulent personal drama for Jarra. As a result, we know it won’t all go as planned.

Earth Flight takes to a pinnacle the series’ ideas about segregation, racism, apartheid even. The fact that the heroine is a young girl (17 or 18 depending on who she asks) coming to terms with romance and her own adoption compounds matters. Not surprisingly, Jarra is a feisty protagonist, outspoken and loud. But although she could have been bitter she turns her energies outwards and the result is a thoroughly enjoyable, positive adventure despite all the trials and prejudice that she faces. After the events of the previous two novels, Jarra is much more confident and assured. Earth Flight is much less about self-discovery than the fruition of all that she has fought (and lied) for over the last year.

Jarra is supported by a whole array of fellow students, soldiers, old friends and teachers. There are plenty of complicated relationships – sex might be taboo on some planets but it certainly isn’t on others and same sex relationships are commonplace, although relationships between Apes and Norms are almost unheard of. Along with intriguing characters, the books also hint at fascinating planets, several of which pay homage to past classical civilisations. It all creates a vividly painted universe, populated by lively characters.

Jarra’s first person narrative brings us even closer to our heroine and it’s a wonderful place to be. I can imagine how much young readers would enjoy reading the adventures of this inspirational female figure. As a slightly older reader, I can confirm that I loved every page and every step of Jarra’s journey.