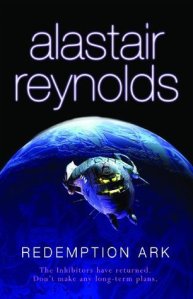 Review
Redemption Ark is the second novel in Alastair Reynolds’ Revelation Space sequence. I think it holds up very well as a standalone novel but if you don’t want to know anything about what happened in the preceding Revelation Space (review here) then I would recommend you look away now.

The Inhibitors are awake, prodded into devastating life by the actions of Sylveste in Revelation Space. Their machine-like obsession is to destroy all life that is able to travel between stars. The Conjoiners – a hive of mind-melded humanity, damned as spiders by their enemies, radiating outwards from their Mother Nest – might have hastily abandoned the construction of interstellar vessels following a warning sent, perhaps, from a distant future but it is too late. The Inhibitors have assembled in the Resurgam system, dismantling moons and gas giants to create a weapon that could tear a planet, an entire solar system apart. Ana Khouri, an inspector on the militaristic and oppressed Resurgam, works with Ilia Volyova, the feared Triumvir of a huge, diseased ship Nostalgia for Infinity, and suspected terrorist Thorn to evacuate as many people as possible from the planet.

Nostalgia for Space contains within its damaged, rat-infested hold a number of superweapons of unknown origin and with their own intelligence. Volyova and Khouri have their plans for the weapons, should the corrupted captain of the infested vessel agree, but so too do others. The ship is pursued by Conjoiner defect Clavain, a man hundreds of years old (relatively) with a need to right a wrong, who is in turn hunted by Skade, an increasingly de-humanised Conjoiner for whom the Inhibitors are no more and no less than hungry, cunning Wolves.

Of course, there is an awful lot more going on than that, not least because each of the chapters is driven by characters who have reached almost the limit of their endurance. The Inhibitors are an emerging threat but there is another war going on, day to day, between the Conjoiners and the increasingly inferior Demarchists. This push for ruin mirrors at a fundamental level the desire of the Inhibitors to destroy species that they too see as a threat. It’s the people caught in this who capture the imagination here. One of these is Scorpio, a hyperpig and an extraordinary creation – repulsive but pitiable. What he and his kind has had to endure from human hands is appalling.

While there is something of the unknowable monster about Skade, Clavain and Ilia are fascinating creations. Both are difficult to like but their drive is total. Throughout the novel, I always wanted to know more about them both. There are other characters that I liked a great deal, particularly Antoinette, a young pilot that we first meet when she is trying to bury her father in a gas giant in the middle of a war zone. Unfortunately, in the second half of the book she becomes of less significance but I think Antoinette is my favourite character of the novel. Possibly the most memorable figure, though, is Captain John Branigan, the unfortunate captain of Nostalgia for Infinity. As with Scorpio, but to a much greater degree, this novel shows how it is possible to loath and pity in the same breath.

Redemption Ark is a long novel and at times it does meander but this isn’t a criticism from me. I read science fiction because I want my mind to expand and my jaw to drop. This book does both. I think that it is a better book than Revelation Space, its structure and story more organised and better plotted. We learn more about the intrigues of Revelation Space, such as the Mademoiselle, but there are hints about other species and wonders that I am desperate to know more about – the Jugglers for example.

Redemption Ark ends very well indeed, in a place that leaves the reader satisfied but yet wanting much more. Just as well, then, that I have Absolution Gap, the final novel in the sequence, ready to go. Alastair Reynolds has become one of my very favourite authors, one of the few whose books will always go to the top of my teetering reading pile. It is a pleasure to catch up on these earlier novels and Redemption Ark is a dark, frightening and exhilarating delight.