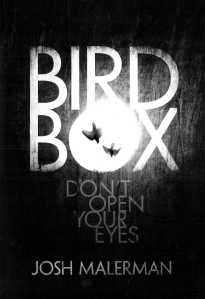 Review
Malorie discovers she is pregnant at the same time as the first reports appear on the news. The violent stories are easy to disbelieve – people in random locations across the world are suddenly and uncharacteristically driven to harm others before killing themselves. As the reports increase in number, worry grows, as does disconnection between places, friends and families, until Malorie and her sister Shannon are left to hide in their house behind windows shielded with mattresses. It is rumoured that it is the sight of something that drives people to murder and self-murder. The internet and television die and, finally, when she looks out of the window, Shannon dies. Malorie has no choice but to seek help blindly, driving with eyes closed towards a nearby house she’d found advertised as a safe haven in a paper’s adverts. When Tom and his companions, blindfolded, open the door to Malorie a new phase in her life begins. Nothing will ever be the same again. Daylight and fresh air are one’s enemies, safety can be found only in dark, stale rooms, filled with fear.

Bird Box is a relatively short novel and it is quite likely that you’ll read it, like me, in a day. Told in the present tense, this is horror at its most immediate and chilling – what could be more instinctive than to open one’s eyes to see the threat, recognise the danger and then be able to fight it? Not in this world. Here, collecting water from the well is the most terrifying test of courage. The person must inch forwards, blindfolded, fumbling, listening for any sound that might suggest that the threat is barely an inch from one’s face. Birds are used as alarms, like some kind of mine canary, while dogs are used as guides for the willingly blind. Everything comes down to survival – and not going mad – as can be seen by Malorie choosing to keep her children nameless. They are Boy and Girl and their senses are now nothing like yours and mine.

The atmosphere of Bird Box is thick with suggestion, horror and dread. This becomes mixed in with suspicion and distrust as the enforced darkness and claustrophobia of such a life closes in. There is a process of dehumanisation underway, although there are efforts to hang on to some kind of twisted normality in this post-apocalyptic world. Not knowing what’s out there and not seeing it makes whatever it is all the worse. The mind begins to compensate for what it’s not allowed to see.

The characters are intriguing and complex and each is different. The similar circumstances between Malorie and another woman in the house raises the tension – as if the tension could cope with being raised even higher. Likewise, there is competition between the men.

Above all else, Bird Box grips like a vice. It was impossible for me to put down. I had to know what was out there on the other side of the blindfold. A completely different type of world is presented and it’s beautifully described. The sounds are intensified, as are the other senses, most memorably in a scene in which Malorie and the children row along a river. As you’d expect, the horror is largely by suggestion but it does reveal itself on numerous occasions and those scenes are terrifying.

A lot is being made of Bird Box. It’s gathering lots of excellent reviews. Having been both mesmerised and frightened by Josh Malerman’s story and by his style and imagination, I can only agree with every word of the praise. Without doubt, Bird Box is one of the best and (perversely) enjoyable horror stories I’ve read for a long time. A great debut.