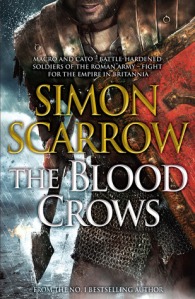 Review
I think I’d better start this review with a confession. The Blood Crows is the twelfth book in Simon Scarrow’s spectacularly popular military Roman series, set in the mid 1st century AD, featuring Macro and Cato. But while The Blood Crows might be Scarrow’s twelfth, it is my first. Having failed in previous attempts to read the early books in the series, I thought I would give it one last push. The result is that I can vouch for The Blood Crows being not only an engrossing and unputdownable Roman adventure, but also that – if you need it to be – it is entirely standalone.

It didn’t matter at all that I hadn’t read any of Macro and Cato’s previous escapades. While I can imagine that if you have read the series through then you will love this one all the more because you know the ins and outs of what these two Roman soldiers have been through, the fact that I knew very little beyond the fact that both had served in Britannia before didn’t affect my enjoyment in the slightest. I would say, then, that The Blood Crows is a very good book indeed – for those who love the series and for those looking for a way in but don’t want to read eleven novels first.

The earliest novels, I believe, presented Macro and Cato in the frontline of the Claudian invasion of Britain. Macro was then the hardened, rough centurion and Cato, a youngster, was his optio, or officer in training. In this twelfth book, the story has moved on (via most of the Empire’s hotspots) approximately six years and Macro and Cato are back in Britain. This time, though, their roles are reversed – Macro is still the centurion, albeit more experienced and hardened than ever, while Cato is prefect, aged beyond his years by events that have left physical and psychological scars.

Aside from the back history, parts of which are dropped unobtrusively into the narrative, The Blood Crows is a perfectly formed whole story. The progress of the Roman Conquest is threatened by Caratacus, a chieftain deprived of his land, who has become a figurehead for vengeance-seeking locals, encouraged by their druid priests. Macro and Cato are sent to the Welsh borders, to a fort that is at risk from a united enemy. Unfortunately, our heroes have much more than angry Britons to deal with. This is a fort like no other.

The Blood Crows is an action-packed adventure from start to finish (with some truly horrible gore and violence) but there are other elements to it that make it stand out. Firstly, the setting and place are vividly evoked, whether it be Londinium, Glevum, ancient sanctuaries or the woodlands and hills of the borders. Also, this is a Roman Britain populated by people drawn from across the Roman empire. It feels alive with cultures, contrasting so well with the expectations and struggles of the indigenous people. Macro and Cato are well liked by many of the locals but time has moved events out of their hands. This is a country at war.

Secondly, the dialogue is second to none. Whatever the region or the ideology of the speaker, what they say rings true. I am a wuss and could have done with a little less swearing but otherwise the dialogue puts the reader right into the heart of what matters, whether it’s an event or a feeling, whether the speaker is a Roman or a Briton. There is also just enough politics to give us an understanding of the influence of a declining Claudius on affairs this far from Rome.

Thirdly, there is Macro and Cato themselves. The characters both have independent personalities but the relationship between the two soldiers is perfectly done. It’s not all roses, especially because the authority has shifted from one to the other, but it is time-tested and trusting. We’re used to Roman soldiers being portrayed as being not necessarily someone you’d invite home for Sunday lunch but there is a pleasing subtlety here.

Having read and loved The Blood Crows, I have bought a couple of the earlier books and will be dipping into the past adventures of Macro and Cato. It can be difficult for readers to approach a series as established as this one but Simon Scarrow has done absolutely the right thing – he has written a novel that will satisfy his faithful readers while winning over many others like me who wanted to get into the series without having to go right back to the beginning. Having said all that, I will now enjoy reading forwards and backwards at the same time.

3 thoughts on “The Blood Crows by Simon Scarrow”