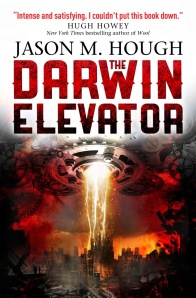 Review
In the 23rd century, mankind gets a jolt. An alien starship centres itself in space above Australia and drops an ‘elevator’ to the ground in Darwin before leaving just a shell of its vessel behind. The people of Earth are inspired, building farms and labs around the Elevator, reaching thousands of kilometres into space and a time of hope begins that lasts for a little over ten years. But then that hope is obliterated. A disease spreads quickly through the air, killing the majority of the planet’s population in mere hours, the remainder are de-evolved, their base instincts of flight or fight, love or play intensified until they can do nothing else. Ultimately, only those who fight survive, feeding off their fellow survivors. But there are a very few, a tiny minority, who don’t succumb to the SUBS virus. They are the immunes.

When it’s discovered that the Darwin Elevator is surrounded by an aura that protects its inhabitants from SUBS, the world goes mad, trying to squeeze into the slums of the once beautiful city. Those within the Aura have to labour, barter and steal to survive while the privileged living in space around the Elevator are known as the Orbitals. Only the immunes, though, have the ability to step outside the Aura into the Clear.

Over the course of this trilogy, published in speedy succession over the summer of 2013, Jason M. Hough presents the struggle of men and women to survive within the confines of an alien Aura that is, and it is a terrifying thought, the only barrier between themselves and certain death or madness. The conflict between the poor at the base of the Elevator and the relatively rich living along its length in the completely different environment of space repeatedly descends into something far more serious. But it’s not just a struggle for survival, it is also a race for knowledge and understanding as it becomes increasingly clear that a countdown of alien events has begun. The visitors – or Builders – have left a pattern. When they return and leave another Elevator in Brazil – this time surrounded by a host of mobile Aura Towers – it becomes clear that there is a sequence of challenges and quests that people must fulfil before the clock stops ticking. 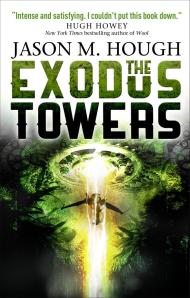 The Dire Earth Cycle is not an easy set of books to put down and it certainly helps that they have been published so close together. To go from one, directly to another is not a common pleasure with new trilogies. They benefit from the fast read. They are driven on by their phenomenal pace. There is barely time to pause breath as adventure upon adventure, puzzle upon puzzle crash through the pages, one after another. These are not relaxing reads.

The constant action, though, is made appealing by the characters that we follow through the novel. Hough focuses on Skyler, the immune pilot who, as the trilogy begins, has just become captain to a crew that scavenges to order within the Clear. With him is another immune Sam, an Amazon of a woman, a brave and heroic figure, no nonsense and intimidating, who is soon left to fend for herself and is always exhilarating to follow. Controlling the ground is Russell Blackfield, our baddie, and an enjoyable baddie at that. He is outrageous with not one saving grace but he’s a pleasure to read about. In charge in space is Neil Platz, scientist and visionary, and working for him is another of our leading figures, Tania. It is Tania who grows most of all through the books, thrown far outside her comfort zone and rising to challenges that leave her terrified but determined.

Over the course of the three novels our characters interact with a host of memorable people – religious zealots (the Jacobites for whom the Elevator is a ladder to God), enemy sadistic immunes led by the monster Gabriel, scavengers, nuns, politicians and young lovers. Skyler links everyone together as he works to understand the Elevators and the intention of the Builders. Locations are equally memorable as we journey across the damaged world, with its shells of former life, sometimes haunted by the zombie-esque SUBS but usually utterly abandoned.

There are thrilling set pieces in all three novels. Many of the characters face terrible, lethal challenges with the narrative moving fast between the different strands, barely allowing the reader to draw breath. But while this is by no means subtle science fiction – it is loud, violent, sometimes grotesque and makes no apologies for any of it – it is well worth the ride for its worldbuilding, characters and intriguing premise. You just have to know what happens. 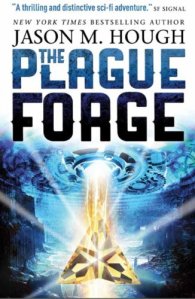 Of the three novels, The Exodus Towers, the middle book, is my favourite. It builds on the premise of the first novel and branches out to give a wider picture of the sick world. It also contains what I think is the best segment of the trilogy (it’s to do with time, you’ll recognise it when you read it) and it answers some of the questions of the Builders while raising many more. The characters have also evolved and the addition of the Gabriel strand works well. The rise of a new force in Darwin, led by Grillo, to rival the despotism of Russell is extremely entertaining.

I did find the concluding novel, The Plague Forge, the weakest of the three, simply because its role is to tie up the loose ends after what has gone before. That fact, though, makes it essential reading even if it doesn’t leave as many memories as its two predecessors. The Builders mystery is one that demands answers and I couldn’t wait to find out what they were about.

The chances are that if you pick up The Darwin Elevator you will not want to leave the trilogy unfinished. I read all three books very quickly and loved the time I spent with them. The trilogy might not be challenging or subtle but it was always fun. Jason M. Hough is an exciting writer and entertaining story teller and I look forward enormously to whatever he turns to next. He and his publisher also deserve extra points for producing the three books in such fast succession – a real treat for the reader and one I’m grateful for.