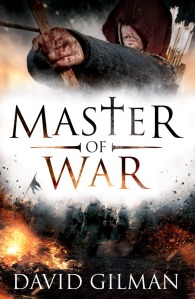 Review
Medieval warfare is all the rage at the moment, no doubt something to do with the discovery of Richard III in a Leicester car park last year. Looking at his battered bones, they can’t fail to evoke all kinds of emotions about the savagery and horror of the medieval battlefield. Mix that with the glamour of knights, archers and the never forgotten great victories against all odds – especially Crécy and Agincourt – then maybe The Hundred Years War or The Wars of the Roses are indeed the New Rome for writers of military historical fiction. Conn Iggulden, one of the masters of the genre, has moved on from Caesar to Richard, Duke of York, in Stormbird, the first of his new Wars of the Roses series published in October this year (review to come). If you can’t wait til then, I can recommend Master of War by David Gilman. Writer for classic television detective series Touch of Frost, Gilman has switched his talents to The Hundred Years War and presents the story of English longbowman Thomas Blackstone during the Battle of Crécy in 1346 and its bloody and dangerous aftermath.

My knowledge of Crécy is largely limited to staring at the tomb effigies of the knights and lords who fought beside Edward III and the Black Prince in this field in France. Like many people I’m sure, I’m more familiar with Agincourt in 1415 but as with that battle the losses at Crécy were immense and largely one-sided with many of France’s noble families affected by loss. It would seem that knightly chivalry was no match for the arrows of English and Welsh archers.

In Master of War we meet one such archer, Thomas Blackstone, a young mason (about 16 years old) and little more than a peasant, although better educated and better favoured than most thanks to a French mother and a brave archer for a father who had saved his lord’s life in battle. When Thomas’s deaf and mute younger brother Richard is accused of murdering a local girl, there is no option but for both brothers to enlist in the troop of their lord’s knight in order to avoid a death by hanging. The fact that both are highly skilled with the longbow makes them invaluable in these early years of The Hundred Years War. Edward III is about to sail to Normandy to reclaim his lands from the French King. His ships are filled with archers.

The novel is divided into three parts and the battle of Crécy takes place in the first. This gives you an idea that while the book seizes your attention with such a major event early on there is also much more to it than that. I don’t want to reveal too much about the events of the other sections of the novel but suffice to say that Thomas has been transformed by what he saw and suffered at Crécy. His actions there have also raised him to a level where he must deal with Normandy’s knights and lords. They are a buffer between England and France with their own ambitions and schemes. Thomas, with English and French blood in him, is in a position that can either be viewed as perfect or damned.

The mix of nationalities and allegiances works well – there is almost more tension between the English and Welsh than there is between Norman and English or Norman and French. No love, though, is lost between English and French – too much harm has been done by both. The theme of chivalry runs through the pages. A man such as Thomas might deny its place in a ‘modern’ battle but its codes colour the actions of many of the characters in the novel. When they’re broken or when promises are found to be false, there is outrage. This is felt not least by Thomas. Also effectively evoked is the landscape of Normandy and France with its cities, castles, villages and abbeys. Its scenes of war are truly brutal and terrifying and mesmerising.

While I did enjoy Master of War very much, this was lessened slightly by its treatment of women. This is very much a novel about war and it makes no pretences otherwise but women are featured and in comparison with the men have very little colour. Thomas’s relationship with Christiana is not very believable to me and felt tagged on. Women throughout are treated with very little respect and while this may well be a reflection of the times it did get a little tiring, especially when the male characters are most animated towards women when thinking about their breasts.

Master of War is an extremely exciting novel. Its pace rarely pauses. But above all else it is steeped in the blood, rage and grief of war, where death can come from every side at any time and in the most horrible of ways, where life off the battlefield can be almost as fragile as on it and where love and friendship have a price. Life was short for archers, knights and the poor. No wonder then that Thomas changes before our eyes to a man that even his friends fear as a harbinger of death. I hope we get a sequel.

2 thoughts on “Master of War by David Gilman”