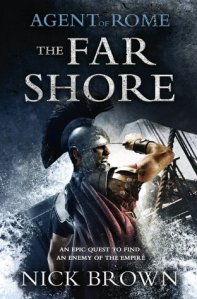 Review
Roman imperial secret service agent Cassius Corbulo is back. Despatched by the chief spymaster to his deputy’s villa on the island of Rhodes, Cassius arrives to discover the deputy, Memor, newly murdered. Not only that, Memor’s head has been sliced off and stolen by his assassin. Reluctantly, Cassius accepts the inevitable and sets off in pursuit of the killer on a winter journey that will take him and his companions across the stormblown Mare Nostrum to Crete and a remote part of Cyrenaica on the cold and dusty North African coast. With Cassius is his gentle Christian servant Simo and his bodyguard, freed gladiator Indavara, whose relationship to the gods is far more complicated, especially after he kicks a priest of Poseidon in the leg. Never a good thing to do before a sea voyage. But they are not alone on their journey. Annia, Memor’s daughter, with her maid Clara, is determined not to let them out of her sight. What they discover and what they must endure on this quest is truly monstrous and changes them all.

The Agent of Rome series is a favourite of mine but, while I would suggest you read The Siege and The Imperial Banner first, The Far Shore stands well alone.

The Far Shore is one of the most gripping novels of Roman historical fiction that I have read. It is heated up with two equally dramatic, harrowing episodes that were impossible for me to put down. The sea voyage is so intense and horrible and brilliantly described that I could feel my own stomach churn, let alone that of Cassius and the others. The captain and his crew come alive, doing much more for the novel than simply sailing our hero across the Roman world. This is then matched by the fascinating depiction of life on the very edges of late Roman rule on its remote North African edge. This is the late 3rd century AD when indigenous tribes were reclaiming lands across the empire, aided by a succession of fleeting, corrupt, embattled governments in Rome. Cassius gets a taste of this first hand in Cyrenaica. A dangerous place at a dangerous time.

Quite apart from the edge of seat action, a great appeal of this series is the trio at its heart – Cassius is an unlikely hero. As he admits, being a secret service agent hardly endears him to strangers, and his youth and arrogance might seem charming at times but at others they get him into all sorts of trouble. He is very likeable but he also can be irritating. His treatment of his servants, and the entire female gender, is enough to make the reader roll their eyes on occasion. But he has many redeeming qualities which shine through despite himself. Simo, the bodyservant from Gaul, is a fine creation by Nick Brown. There is so much I want to know about him. We see him mainly though his master’s eyes but we get glimpses of something much deeper and fascinating. We found out a little about Simo in The Imperial Banner and I’m looking forward to learning much more. Indavara is likewise a character with a lot to give as we go through the novels. The Far Shore tantalisingly delivers some of Indavara’s past. The dynamic between the three can be laugh out loud funny, amusing, or deeply touching or on edge. It works very effectively to unite the novels together even though the action in them is largely independent.

It’s worth mentioning that the baddie here is not only spectacularly inhuman he is also brilliantly compelling and, unusually for such a horrible bit of work, intriguing.

Overall, The Far Shore is a thoroughly enjoyable, fast and furious, often funny Roman adventure, populated by people I care about and set in a world in which demons are at work.

Other reviews
The Siege
The Imperial Banner

6 thoughts on “Agent of Rome III: The Far Shore by Nick Brown”