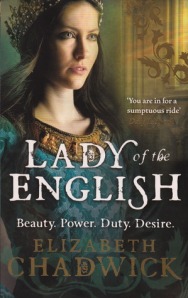 Review
Having been thoroughly seduced by Elizabeth Chadwick’s utterly mesmerising telling of the story of William Marshal (in The Greatest Knight and The Scarlet Lion), I couldn’t buy her latest book, Lady of the English, fast enough.

This novel steps back a generation or two to the first half of the 12th century and the aftermath of the death of Henry I, the son of William the Conqueror. Having ruled with a strong fist for 35 years and with his heir drowned in the English Channel off the coast of Barfleur, the King’s death resulted in the first of England’s civil wars – the Anarchy. This pitted Henry’s daughter Matilda, the widowed Empress of the Holy Roman Empire, against her cousin Stephen. But although Matilda laid claim to be Lady of the English and was ready to raise armies to fight for that right, Elizabeth Chadwick here tells her story in tandem with that of another who could be rightly styled with that name – Adeliza, Henry I’s young widow and the stepmother of Matilda, even though they were separated in age by only a year. And what different women they were too.

Lady of the English has two (at least two) sides to it. One is the military struggle for supremacy, which saw, for instance, Matilda scale down the wall of Oxford castle on a rope before crossing frozen rivers to safety. The other is the personal effort of both women to assert independence in the years following the deaths of their first and powerful husbands. For Adeliza, although just a young woman, the convent would have been a safe haven for the rest of her life. Matilda, on the other hand, is a pawn in her father’s hand to strengthen his influence on both side of the Channel. Chadwick shows us the different paths that Adeliza and Matilda took, or were given. Adeliza was able to marry for love, to William D’Albini, a supporter of Stephen, whereas her stepdaughter was married off to Geoffrey, Count of Anjou, a youth and bully, but with the wherewithal to rally resources to fight for his wife’s claim to the throne of England and the duchy of Normandy. This choice of husbands inevitably made reluctant enemies of these two ladies of the English.

While the history is fascinating and it is so interesting to follow the impact of the Anarchy on castles, towns and counties so familiar to us, at the heart of Lady of the English is the personalities of the two women, especially that of Matilda.

It is clear from the novel, and it is explicitly stated, that Matilda was her own worst enemy. Elizabeth Chadwick has achieved quite a feat here – she has created a compelling and rewarding novel about a main character who is, at least to me, extremely unlikable. Matilda can barely open her mouth without hurling insults at anyone within reach and she rewards the devotion of men such as Brian FitzCount, her loyal knight throughout her life, with little more than contempt. She is extremely moody and aggressively grumpy. Not the sort of woman you’d want to be around but it does make for a very intriguing and unusual heroine. Perhaps the continuous struggles of her life following the death of her first husband made this inner rage inevitable, even useful. It certainly makes Adeliza radiate with selflessness, generosity and piety by comparison. But whatever Matilda’s temperament, no woman deserves the husband she was given in Geoffrey of Anjou. While Matilda is unlikable, Geoffrey is downright despicable. But women, however powerful they may seem, had to make the best of a bad lot.

Lady of the English places the last years of Henry I’s reign and the struggle of the Anarchy within the personal context of the lives of Matilda and Adeliza. The difficulties faced by both women to have children plays an important part and the relationship between both sets of mother and father with their offspring is a fascinating part of this novel. Having read about Henry II and his wayward sons in the Marshal novels, it is intriguing to spend some time here with the young boy Henry. You can see the man and king he would become and that strength and ruthlessness, and cruelty, seem far easier to understand when we take a look at his mother and father.

It seems inevitable that the story of Adeliza and her second husband takes a subordinate role to the extraordinary Matilda and Geoffrey but they do play an important part here, not least towards the end in the most poignant section of the novel. In retrospect, Adeliza’s character seems as unusual as Matilda’s, at least to our modern sensitivities.

Lady of the English is a novel driven by ambition, rage, duty and determination. It is far less about battles than it is about people. It is also a love story – although I think the novel could have managed well without the repeated sex scenes. The ideals of courtly love, despite the horror of war and the terrible condition of Matilda’s marriage, do occasionally show themselves. The novel is long and the better for it. It is fast moving, driven as it is by the resolution and drive of Matilda, one of the most unusual female figures in all English history and, arguably, the first woman to rule in her own right – against all odds.

This summer, Elizabeth Chadwick turns her attention to Eleanor of Aquitaine in a new trilogy, beginning with The Summer Queen. I cannot wait.

Review of The Greatest Knight and The Scarlet Lion