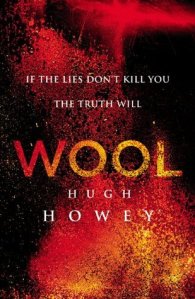 Review
Several hundred years in the future, life is confined within an enormous underground silo. Over 140 levels deep, it is self-sufficient. Mines, mechanics, farms, IT, schools, nurseries and police, all within their allocated levels, with deep downers rarely venturing to the top. Now and again, though, a cleaning takes place and hundreds climb the stairs to reach the viewing windows at the very top. Through them they see a world that is dead, windswept by toxic clouds, a ruined city in the distance, presumably the aftermath of nuclear armageddon. In the foreground are the remains of dissidents and criminals, whose punishment is always the same – they are sent outside with limited air to clean the glass. And they always do.

Wool began life as five individual novellas, each longer than the one before it. Not surprisingly, the online release of the first, in which a good man volunteers to leave the silo and clean, was met by demands for more.

In five stories we head deeper into the silo, learning more about the people who control it as well as those who have reached the end of their tether. Knowledge of the past is banned, questions about the outside are banned, children are banned – except if someone dies and then a fortunate couple is selected and given one year to give birth and keep the endless cycle of death and life turning.

The worldbuilding in Wool is excellent. The claustrophobic, spiralling silo environment is vividly done, especially in the second story when the mayor and her deputy sheriff undertake an expedition, slowly travelling all the way from the top to the bottom, step by step, overtaken by fast-footed porters, trotting up and down the endless levels transporting their heavy loads. The mayor and deputy sheriff are on a mission, almost a pilgrimage. They want to fetch Jules or Juliette, a Mechanic from the deepest deep, to take on the role of sheriff. Juliette becomes the principal figure of the remaining three parts of the book but this second part is especially compelling as we travel the depth of the silo, encountering its societies at the top, middle and bottom, including the villainous IT department

Despite the fact that Wool was once five separate stories, this did not interfere with my enjoyment of the book as one whole. The parts each end at a turning point, making the pages almost turn themselves. The pace is relentless as the silo begins to boil and we begin to learn much, much more about the purpose of the silo, desperate for hints as to its history and on the edge of one’s seat as its inhabitants seek to change its future.

Above all else, Wool succeeds as well as it does because it is character-driven. Juliette, Mayor Jahns, Holston, Lukas and Walker are not the only memorable characters. There are plenty more as the wool unravels and I don’t want to mention their names here. There are mysteries and shocks galore.

Wool is teeming with revelations and it is packed with thrills. It is dense with atmosphere and in places utterly horrifying, confronting a host of phobias. It is also intensely sad on occasion. Above all else, Wool is a great read and fortunately indeed there is much more to come.