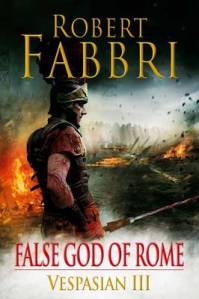 Review
You know that you’re about to embark on a new year full of fine books when it kicks off with the publication of a novel by Robert Fabbri, one of the best writers of historical fiction about today. Vespasian, the 1st-century AD general who against all odds survived a succession of Rome’s most nutty emperors to don the purple himself, is a worthy subject for a series of novels and Robert Fabbri has done him justice. In the third novel, False God of Rome, everything takes on a whole new edge. Caligula is now emperor and it is no spoiler to say that here is a madman of Olympian proportions. There is a chance that, like me, you may want to read some of Fabbri’s portrayal of these mad years with your eyes shut (or at least with an empty stomach). Fortunately, Vespasian marches through the insanity but even he cannot be unaffected by these dark days.

False God of Rome is a novel in three parts, beginning with a wonderfully evocative section in Jerusalem in 33 AD where Vespasian’s brother Sabinus is quaestor, finding himself caught in a struggle between Jews and Romans, all of whom seem determined to have one heretical voice silenced on the cross. Vespasian himself has troubles of his own. Struggling to survive in the western desert of Egypt, he has his his own mission to carry out. Later, back in Rome, danger comes from a much more fearful source than the heat of the desert sun and sand. Caligula is less predictable than nature while Rome has become more treacherous than any desert. Caligula has another mission for Vespasian. He seeks authenticity for his Godhead and so Vespasian is sent back to Egypt, this time on the trail of the remains of Alexander the Great.

Robert Fabbri has a remarkable knack of bringing the ancient Roman world to life. Quite apart from his dexterity in recreating the lost cities of Rome and Egypt, he captures brilliantly, and horrifically, the most awful terror that Caligulan Rome must have held for its ruling classes. In the second book of the series, Rome’s Executioner, Tiberius is presented as I’ve never seen him before in fiction and its power gave me nightmares. Through the preceding two novels we have watched Caligula grow up as Vespasian’s friend. We have the power of hindsight denied to Vespasian but during this third novel Vespasian finally confronts the reality. We have also enjoyed Vespasian’s relationship with the matriarch of Rome, Antonia, but all that means nothing when her grandson Caligula assumes power. This is the value of a series following the life of one man. We have begun to know the men and women around them and what becomes of them is all the more poignant and horrifying for it. What this reign of terror does to Vespasian is a strong theme – there have to be ugly compromises.

The lightness here comes from the relationship between Vespasian and Caenis, the slave of Antonia. The darkness, though, comes in the unmistakeable form of Caligula. False God of Rome is not my favourite of the series – that would be the marvellous Rome’s Executioner – but that is mostly because of Caligula himself. A truly odious individual, his perversion is brought home to me here more immediately than Suetonius ever managed. I am a queasy, delicate soul and so this book did do some damage to my digestive system.

Nevertheless, wonderfully written, with the pace of a runaway train, False God of Rome is a fine addition to the series. I’ll just be relieved when Vespasian emerges on the other side. Mind you, you know what that means? Nero! 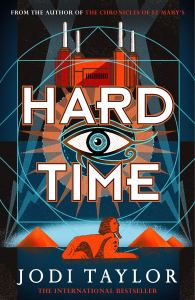 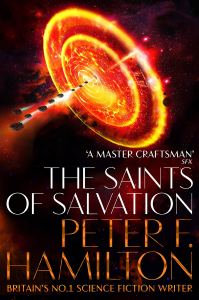