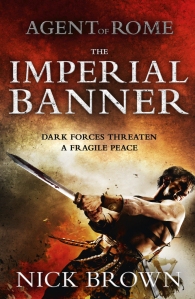 Review
For some reason that I cannot fathom, I have yet to read Agent of Rome: The Siege, the first of Nick Brown’s Roman tales featuring imperial agent (or corn man) Cassius Corbulo. However, having now read the second in the series, this year’s The Imperial Banner, I’ll be putting that right. Fortunately, although the same characters are featured – especially the wet-behind-the-ears Corbulo and his reliable and kind Christian servant Simo – Imperial Banner does stand alone very well indeed.

Nick Brown transports us back to late 3rd-century AD Palmyra. Queen Zenobia has been defeated and she is the captive of Rome and its emperor Aurelius. Manoeuvres are afoot, though, to bring about a historic peace treaty between the Roman and Persian Empires. Vital for this is the ceremonial handing over by Rome of Faridun’s Banner, the treasured standard of Persia. It’s unfortunate, then, that the banner appears to have gone missing, stolen by person or persons unknown. Cassius Corbulo, a reluctant agent who had been attempting to keep a very low profile in some quiet town with fig trees, is recalled to Syria and given the lethal mission of tracing the footsteps of the men (and fellow agent Gregorius) who had been attempting to escort a great Persian treasure, including the banner, to its new Roman masters but had instead disappeared off the face of the earth.

Corbulo is given an extra pair of hands to help. They belong to Indavara, the ex-gladiator.

The Imperial Banner has an explosive opening chapter – we find ourselves in the gladiatorial arena as Indavara faces his twentieth bout. Should he survive it, and it’s considered very unlikely he will considering the forces he must overcome, then he will be freed. His master has bet against him, not a good sign. Although we know that Indavara will be a significant character in the novel, his success against all odds is nonetheless remarkable and ensures our respect for him through the rest of the pages. Corbulo wasn’t a witness to Indavara’s cunning and courage in the arena and so he is far less tolerant than us of this reticent, quiet and troubled ox of a man. But Corbulo isn’t the only man that learns to know Indavara (sometimes the hard way); Corbulo’s servant Simo, a gentle and kind man, though equally brave and determined in his own way, forges his own relationship with the ex-gladiator.

As the small team work their way across the desert and into Antioch, uncovering the bloody evidence of a merciless and brutal plot, there is no shortage of adventure. This, though, is offset by moments that put a lump in the throat. When, for example, soldiers are punished by picking a courtyard clean of weeds, Simo and Indavara are found helping – one because a fellow man needed a helping hand and the other because he likes to keep busy. Time after time we watch Corbulo, a young and often irritating aristocrat, roll his eyes at his companions but as the novel and the journey progresses they each have lessons to learn about the others. Christianity is oppressed in Antioch and Simo must confront the very personal consequences of this; Corbulo has his own arrogance and petulance to overcome as he learns his craft; Indavara learns a human lesson – that he is not alone.

It’s these human elements that add a great depth to Agent of Rome: The Imperial Banner. The action is hugely exciting and there is lots of it. Corbulo can barely survive a day without almost everyone he meets wanting to snuff the life out of him. But this is matched perfectly with the more intimate human drama between these three very interesting protagonists.

Agent of Rome: The Siege is now a priority read and I also look forward to future novels. There is much ground to cover.

6 thoughts on “Agent of Rome: The Imperial Banner by Nick Brown”