The cancellation of the Festival of History at Kelmarsh in July due to this summer’s constant deluge required consolation. It came in the shape of History in the Court, last night’s get together of a large number of writers and readers of historical fiction at Goldsboro Books in London. Greek, Roman, Viking, medieval, modernish tales – whatever your poison, if you enjoy historical fiction then the cup doth flow over at this wonderful event. In fact, it’s quite possible that you can drink too much (in more ways than one), such is the sheer quality and quantity of the authorship ready to stand and have a chat with appreciative readers. And then there’s the books – shelf upon shelf of tantalising hardbacked, signed temptations.

Back in April I was fortunate enough to attend a book launch at Goldsboro Books (for Anthony Riches’ The Leopard Sword and Giles Kristian’s The Bleeding Land) and so I had some idea of what to expect. History in the Court was every bit as fun and exhilarating as I could have hoped, with good friends all around (and keeping an eye on the wine for me).

It was so good to meet authors again and I must thank Caroline Lawrence, Doug Jackson and Manda Scott in particular for their time. There were also authors that I was so keen to meet for the first time, including D.E. Meredith, Mike Arnold, Robert Fabbri, Richard Pierce and Kate Williams. There are reviews of books by many of these authors between these pages.

Combining a great talent for writing fiction with a knowledge and love of history is clearly a fabulous mix and the sheer range of writers on hand to chat and sign books was astounding. I will never lose the sheer thrill of having authors whose works I have devoured and loved greet me by name. And it’s a privilege to be able to tell an author face to face how much you enjoyed his or her work. It does me good. 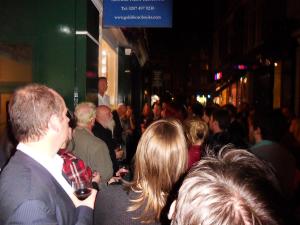 The first Historical Writers Association/Goldsboro Prize for Best Debut Historical Novel was awarded during the evening by proprietor and literary agent David Headley. You can read about the shortlist here. The winner was announced as Robert Wilton for his 19th-century novel The Emperor’s Gold. 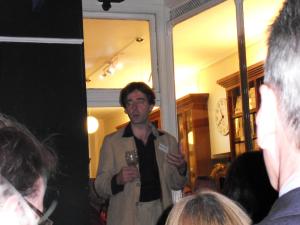 Angus Donald, author of the fantastic Outlaw series, also delivered a very well-received speech on Books for Heroes, a project that sends historical fiction paperbacks out to the troops in Afghanistan. Should you be interested in donating books, you can contact Angus on his website.

History in the Court was a great evening out and I can only hope it takes place year after year. It is a delight to be able to spend time in such an informal way with much admired authors and fellow readers and friends. Thanks to David Headley and Goldsboro Books for organising such a wonderful event and thank you to all the authors and behind the scenes and hugely appreciated book people for making it as memorable as it was. Cheers!