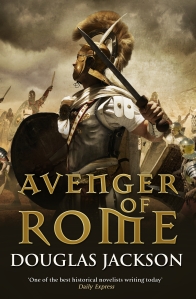 Review
Gaius Valerius Verrens, the Hero of Rome, is back. His title is just. Having barely survived the bitter onslaught of Boudicca on the Temple of Claudius (Hero of Rome), Valerius returned to Rome to receive the adulation of the deranged Emperor Nero as well as the terrible and bloody task of ridding the city of its Christians (Defender of Rome). Now, in the third novel in the series, Valerius is given a choice. He must ride out east to Antioch to spy on Rome’s most successful general Corbolo and, if necessary, remove him from the reach of Nero’s jealous gaze or his sister will be eliminated. What choice is there? Still honourable, and always brave, Valerius agrees to escort Domitia, the daughter of Corbulo, on a sea voyage to her father’s side. Despite the pressure, Valerius is no slave to the whim of a half mad emperor. He is our hero, a likeable, proud and less than whole man, who will do whatever he can to stay as true to the course of honour as he can in these dark days.

Avenger of Rome is a book of two halves – the first follows Valerius’ most arduous journey to Antioch escorting the lady Domitia to her father Corbulo, both strong and fascinating characters. The second half places Valerius in his more familiar surroundings – the bloody battlefield. It would be difficult to decide which is the most exciting and moving. The journey to Antioch becomes a lesson in survival for Valerius, the brave and indomitable but so young Domitia and Valerius’ new friend junior tribune Tiberius, who is en route to begin service in Corbulo’s army. When they finally reach the general in Antioch, ties have been formed which will inform the rest of the story.

Corbulo has a plan to keep the eastern kings in their place and he is prepared to carry out his scheme even though he is well aware that it may mean his destruction at the whim of a jealous emperor. But Corbulo is a man who puts the needs of his country above those of himself. Not surprising, then, that Valerius finds a man to honour. The relationship between Corbulo and Valerius forms the heart of the second half of the book, just as the friendship between Valerius and Domitia and Tiberius is the centre of the first half.

There are deadly battles here and great bravery and sacrifice by the general, his commanders and their men, but what makes Avenger of Rome such a satisfying and rewarding third novel is that it is different to the previous two. The astonishing Temple of Claudius scenes of the first novel of the three, Hero of Rome, makes that a difficult novel to beat in terms of bloody action and thrills whereas Defender of Rome is an enormously dramatic depiction of life in Rome under Nero, whether one is an ambitious soldier or a vulnerable Christian. Avenger of Rome is different again. This time, in tandem with the battles against Parthia’s finest, we have conspiracy, raw emotion, love even and masses of danger, not all of it on the battlefield.

Much of the action may take place far from Rome, but the centre of the empire isn’t forgotten and there are scenes in which we get far too close to the rot at its heart, namely Nero and his Praetorian Guard.

Valerius continues to deserve the title of hero – ours as well as Rome’s – but in Avenger of Rome there are also three other characters who you’ll remember: Corbulo, Domitia and Tiberius. We’re invested in all three and as a result Avenger of Rome doesn’t just thrill, it also moves. It’s not often a novel about a Roman soldier moves me to tears, but this one manages it. The Sword of Rome is coming…

You don’t need to have read the previous two novels to enjoy Avenger of Rome, but it would be such a shame to deny yourself the treat.

I also recommend Douglas Jackson’s thrillers under the name of James Douglas:
The Doomsday Testament
The Isis Covenant

2 thoughts on “Avenger of Rome by Douglas Jackson”