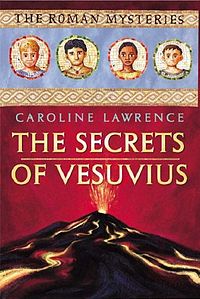 Review
I tend to approach Young Adult or Children’s literature in the same way that I do any other book, with an open mind and an excited sense of anticipation. Just as a good animation film should deliver treats for all its viewers, regardless of their ages, so a well-written book, ostensibly aimed at younger readers, is more than likely to contain some goodies for the less young reader. I would never like to think of myself as an Old Adult…

And so when a writer I hugely respect, Ben Kane, recommended Caroline Lawrence’s Roman Mysteries to me, I snapped one up. Specifically, the second one, The Secrets of Vesuvius. It has Pompeii under volcanic attack in it – big selling point for me. Throw in some Pliny and there was no way I was about to start this series anywhere else.

The Secrets of Vesuvius continues the adventures of a group of children who are drawn from all reaches of the empire, led by the constantly curious, mystery-seeking Flavia, who lives in Ostia with a well-heeled Roman father. Her constant companions are Jonathan (a Jewish Christian), Nubia (a rescued slave and orphan from the Nubian desert) and Lupus (a mysterious, brave Greek boy whose tongue has been cut from him). With them they have an assortment of dogs, led by Flavia’s Scuto, who seems to get into even more mischief than his young mistress. And then there is Miriam, Jonathan’s beautiful and very marriageable older sister (she’s reached the ripe old age of 14).

As the book opens, Lupus saves a floundering tubby drowning man who turns out to be the Admiral of the Roman Fleet, Pliny the Elder. Fortunately, along with his life, the youngsters also save his precious writings and, for both, the kids are rewarded with special, personalised gifts. Flavia’s is a riddle from Pompeii. If she can identify the riddle and seek out the blacksmith Vulcan, there will be treasure. Just as well, then, that the whole group (as well as Pliny) is off to Pompeii to stay with Uncle Gaius. A shame, though, that they picked August AD79.

I’ll say no more about the plot, which has some very pleasing twists and turns as the children (and their dogs) get tangled up in a mix of red herrings, hounds and love. Yes, love is in the air for one of the party. However, one can hardly ignore the fact that the great mountain that dominates these towns is about to blow its top and, as reality hits, there is a very strong menace of danger.

The narrative is mixed with all kinds of details that appealed to me. Jonathan’s father is a doctor and we learn about 1st century AD medicine just as we also learn, in an admirably unobtrusive fashion, something of early Christianity – both its practice and  its standing in the pagan world. Pliny is a delight. I have read a fair amount about Pliny and his attempted rescue of victims of Vesuvius and the details here ring very true. Caroline Lawrence clearly knows her history but, possibly even more importantly, she conveys this knowledge with an accessible and fascinating slight of hand.

Children are in good hands with the Roman Mysteries series. Such books are so important in a child’s progression towards a love and appreciation of the history around them and further afield. As we get a little older, one recognises that there is still so much to learn and a book such as this is not only a lot of fun it lights sparks.

I should also point out that I read Secrets of Vesuvius in a day. I could not put it down. I’ve already snapped up the next, Pirates of Pompeii.

There are quite a bunch of books in this series, not to mention a couple of television series you can buy on DVD. All of the details and more about the characters and their world can be found at the fun Roman Mysteries website. I also recommend Caroline’s blog, which contains some revealing insights into her research for the novels.

4 thoughts on “The Roman Mysteries, The Secrets of Vesuvius by Caroline Lawrence” 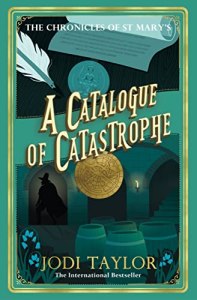