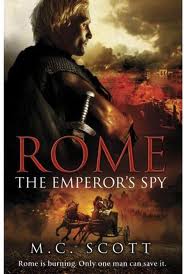 Review
Manda Scott is best known for her Boudica novels. These four novels describe the transformation of Breaca into the Boudica, the celebrated warrior queen of the Iceni who dealt Britain’s Roman overlords their greatest defeat and humiliation. In Rome: The Emperor’s Spy, the first in a new set of novels, Scott becomes M.C. Scott and we are taken into the larger world of the Roman empire, from Gaul to Jerusalem, Alexandria and Rome itself. Chief among the characters looms Nero himself. We couldn’t be closer to imperial Rome’s political intrigue.

As the novel opens in 1st-century AD Jerusalem, we witness a young boy watching his father, a Roman soldier, hand over the still breathing body of a crucifixion victim to a woman and a zealot. Wanting nothing more than to be a citizen of Rome, the child sees this as a betrayal and he immediately sets off alone to Alexandria and Seneca, a great teacher and philosopher. When we meet the boy again, he has grown in to Sebastos Abdes Pantera, the emperor’s spy. We are now in Gaul amongst its finest charioteers.

Much of the action of the novel is presented from the perspective of Math, a young boy who works with the chariot horses, who has used his wits and beauty to pick pockets and whore. At first sight he is captivated by the charisma and bearing of Pantera and he sets out to become as good a spy, following him into the night, hiding under water troughs, taking beatings when he is caught.

This is where knowledge of the legacy of the Boudica novels would help. Math, his father Caradoc and other characters will be known to readers of the earlier novels and would explain why, once he has learnt of the true identity of Math, Pantera swears to defend him with his life. He’s not alone, Math is also protect by healer and mystic – and extremely likeable – Hannah.

The emperor’s spy then has two missions, to protect Math (not least from Nero) and to work for the emperor to discover the truth behind a legacy that foretells the burning of Rome. All this against the backdrop of chariot racing, and the schemes of Nero’s chief agent Akakios and the less obvious intentions of Shimon the Zealot and Saulos, the quiet and kind leatherworker in the chariot compound.

Anyone with some knowledge of history knows that Rome did burn, whether Nero fiddled or not. At the time Christians took the blame and this novel takes a look at whether that blame is deserved, tracing the first spark back to the rescue of the young Judean from his tomb in Jerusalem.

My confession is that I have read the first of the Boudica novels but I did not enjoy it, possibly because I could find no empathy with the characters or with their world. This, however, did not affect my appreciation of Rome: The Emperor’s Spy. A knowledge of the characters from earlier novels is not essential, their strength in these pages makes each stand alone. This novel is full of action, not least the fearful chariot races, pursuits through busy city streets, close combat and the inevitable inferno. But the action is matched by a most captivating narrative. Each character, from Nero himself through to a fleeting encounter in the street, is intriguing. Pantera in particular is a remarkable creation. As for his backstory…

No doubt one can argue about Scott’s explanation of the role of Christianity in the burning of Rome, not to mention her interpretation of the figures of Paul and Jesus, but the background, the characters and story are so well drawn, the details of ancient life and towns so clear, that this novel is a joy to read. It isn’t short but I read it in two days. Luckily, Part 2 – Rome: The Coming of the King – is already available.